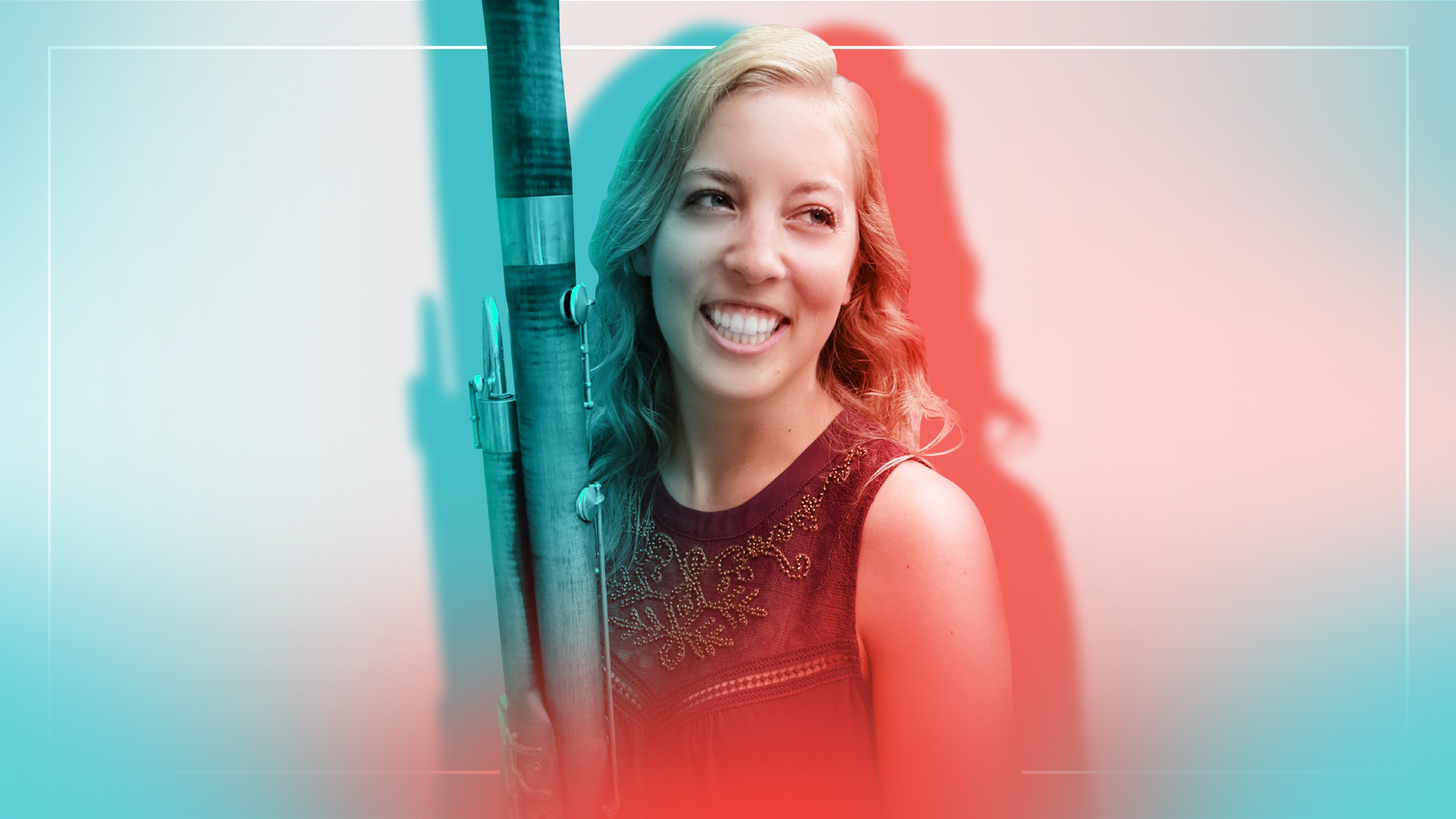 Every year, musicians from American Youth Symphony accept orchestra positions, leave for graduate school, or focus on the next step in their careers. This season, we have over 25 musicians leaving AYS and joining the network of over 2,500 AYS Alumni living and playing music worldwide.

While being a part of the AYS orchestra, they played at beautiful concert venues like Royce Hall and Walt Disney Concert Hall, worked with guest conductors, diverse composers, and some became mentors to middle school students in our music education program. As much as musicians learn from AYS, we also learn from them through their leadership and drive to expand the future of classical music by integrating technology, being musician activists, and performing in new spaces and communities. Each year, we become re-inspired to continue our mission of supporting the future of classical music.

We wanted to honor the next class of AYS Alumni by hosting an inaugural recital. Four musicians of the twenty-five will share music in celebration of the next generation of professional musicians. Read more about the soloists and newest cohort of AYS alumni below and watch them perform on Friday, June 26th 4:00pm Pacific, 7:00pm Eastern on YouTube Live. 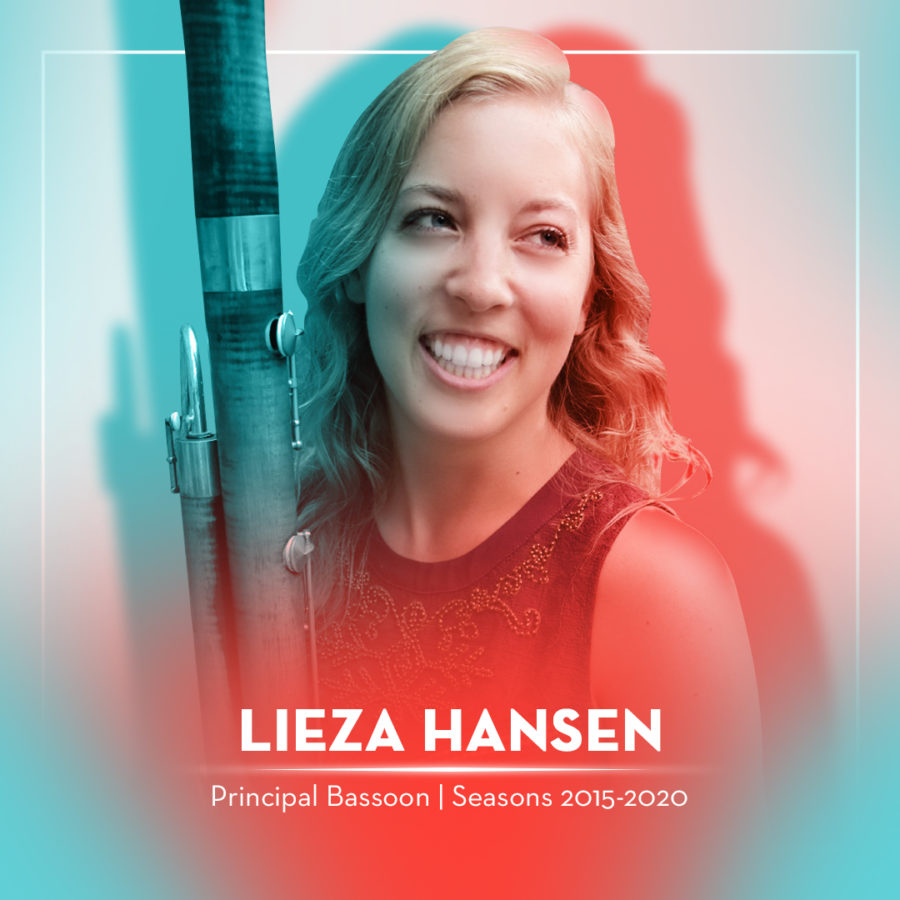 As a bassoonist in Los Angeles, Lieza Hansen has performed in a variety of settings, proving both versatility as a performer, but also as a pedagogue. In addition to performing in multiple regional orchestras across Los Angeles, Lieza holds the principal bassoon chair at the distinguished American Youth Symphony. Performing accomplishments include well received performances of the Ravel Piano Concerto in G Major as well as Stravinsky’s tour de force Le Sacre du printemps at the Walt Disney Concert Hall. Lieza maintains a private studio in Los Angeles, she has given group masterclasses at a number of schools around Southern California as well as in her home state of Iowa, and she works with the American Youth Symphony’s “Share-A-Stand” program. Also a skilled reed maker, Lieza provides bassoon reeds to numerous students and professionals across Southern California. Lieza holds degrees from the University of Iowa and the University of Southern California.

“Being a part of AYS for the past few years has had an enormous impact on my life as a musician. Playing important repertoire in a supportive group alongside my good friends has helped me cultivate the confidence needed in this profession. Our concerts are always exciting, challenging, and forward-thinking, which represents who we are as musicians.” – Lieza Hansen 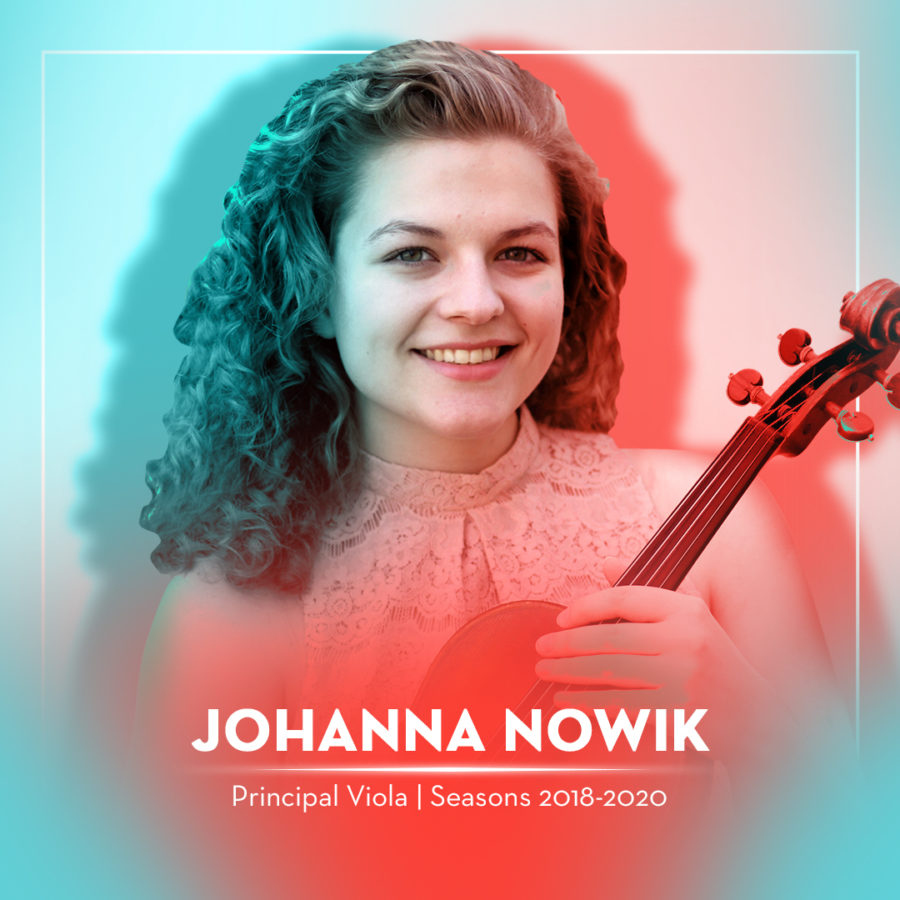 Johanna Nowik hails from North Plainfield, New Jersey. She was a 2018 quarter-finalist in the Primrose International Viola Competition, and in 2017 was awarded first place in the strings division at the Pasadena Showcase House Instrumental Competition. Johanna has collaborated with artists such as Orion Weiss, Noah Bendix-Balgley, and Robert Chen, and was recently a guest artist in the New Hollywood String Quartet’s “Summer of Brahms Chamber Music Festival” in South Pasadena in 2019.

Johanna has served as principal violist of the Colburn Orchestra, the Spoleto Festival USA Orchestra, and the Tanglewood Music Center, where she was a fellow for three years. She has performed as a substitute musician with both the Los Angeles Chamber Orchestra and the Los Angeles Philharmonic, and is scheduled to join the San Diego Symphony as a member of their viola section starting July 2020. Johanna received her BM in Viola Performance from the Colburn Conservatory of Music in 2019 as a student of Paul Coletti, and returned to receive Colburn’s Performance Studies Certificate in June 2020.

“The American Youth Symphony serves as a professional training ground of the highest quality for young musicians. Thanks to the rich performance opportunities which AYS provides, and the diverse selection of repertoire studied and performed each season, students emerge from the program equipped with the necessary skills to bridge the music of yesterday, today, and tomorrow, bringing young musicians to the forefront of the arts.” – Johanna Nowik 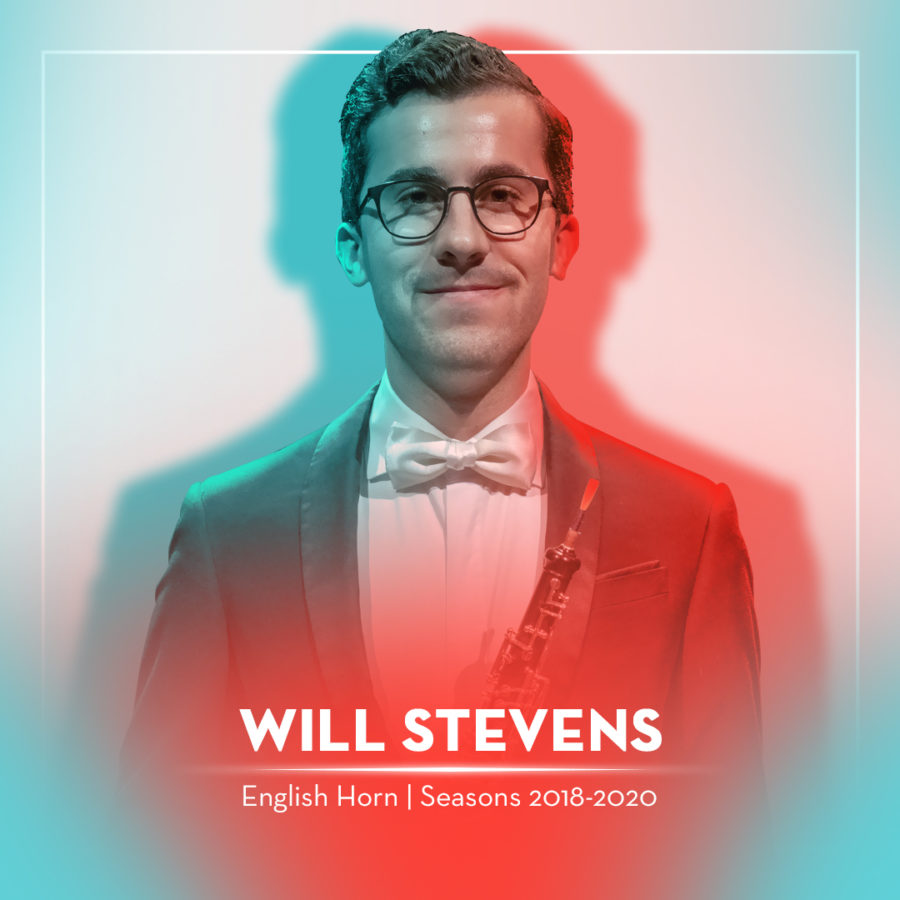 Will Stevens is a young professional oboist from Los Angeles. He has just finished his undergraduate music studies at UCLA, and will be continuing his studies at Yale University in the fall for his Masters. He currently holds the English Horn/Oboe 3 position with the Redlands Symphony, and has been a member of American Youth Symphony since its 2018-19 season. Aside from AYS and Redlands, Will has been working in LA as a freelance musician, arranger, audio technician, and reed maker.  He is very sad to be leaving AYS, but he hopes to apply all of his experiences and knowledge to his future work on the east coast.

“AYS taught me everything I needed to know about pro orchestra decorum. After completing my first season with AYS, I won my first professional orchestra position with the Redlands Symphony, the same chair that I hold with AYS (English Horn/Oboe 3). My experience with AYS’s audition process, rehearsal process, and performances directly contributed to my success at Redlands. AYS also cultivated an environment where I could meet and network with musicians outside of my university (UCLA). My fellow oboists in the section have taught me new perspectives on oboe playing, provided friendship, and always helped me find work. I am really grateful for my time with you all!” – Will Stevens 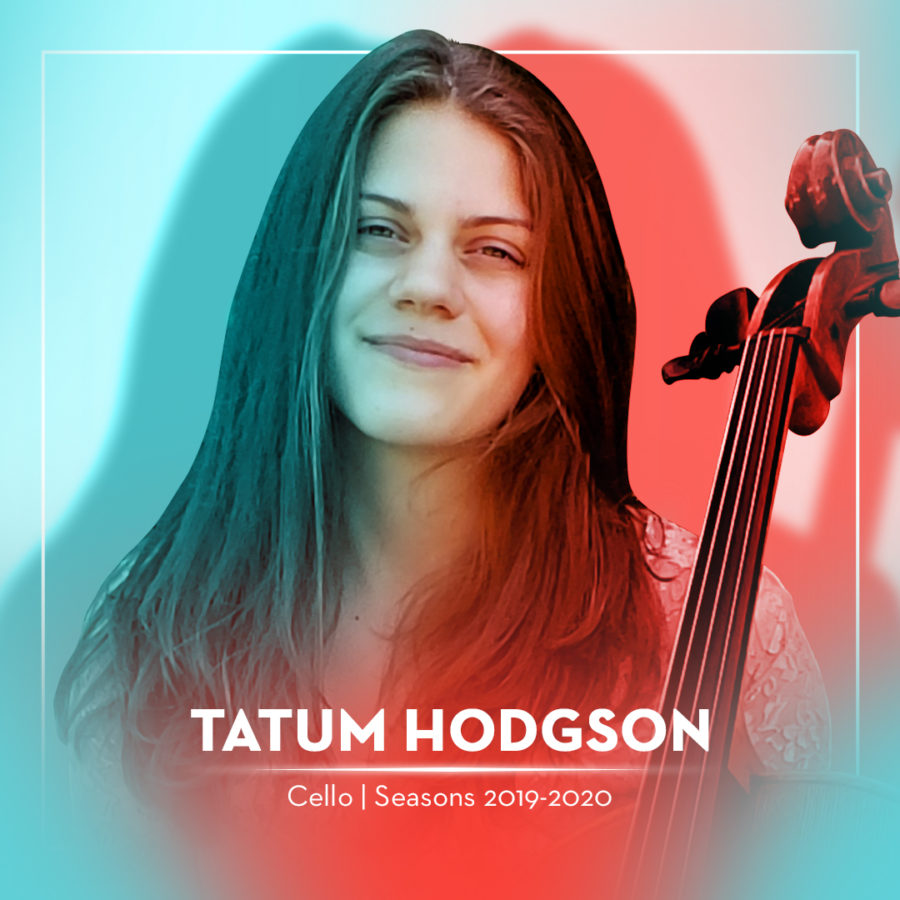 Tatum Hodgson is a working freelance musician in LA. She held principal cello position in Claremont Young Musicians Orchestra (CYMO) for two years and currently plays in American Youth Symphony. In 2019 she performed Tchaikovsky’s Rococo Variations with CYMO on their final 30th anniversary concert. In 2018, she won the baroque concerto competition at IU’s String Academy. She is a member of Pasadena Conservatory of Music, Colburn Chamber Music, and Junior Chamber Music (JCM). She has won first place in competitions including ASTA solo recital and Satori Strings. She has been a merit scholarship recipient for Interlochen, Montecito International Music Festival, Credo Chamber Music Festival, Indiana University Summer String Academy, and Borromeo Chamber Music Festival. She was selected to perform in masterclasses under various esteemed artists including Sung-Won Yang, Nathan Vickery, Brandon Vamos, Amir Eldan, and Amit Peled. Tatum is attending Cleveland Institute of Music in the fall studying with Dr. Melissa Kraut.

“AYS has provided a professional environment for me to grow as a performer. The community is supportive and dedicated to the mission of bringing young artists together to give quality music to the community. I began subbing with AYS as a sophomore in High School. It gave me a glimpse of what a professional career in music looked like and inspired me to become a better musician. This year, as a member, I left every rehearsal and concert inspired by the level of dedication. A unique aspect of the orchestra is the diversity of repertoire, with clear and knowledgeable instruction from Maestro Izcaray. I hope to stay connected with AYS in the future as I continue to pursue a career in music at Cleveland Institute of Music.” – Tatum Hodgson

Congratulations to all of our new AYS Alumni!