Kris Bowers: For A Younger Self

On February 8, 2020 American Youth Symphony returns to Walt Disney Concert Hall with works from Kris Bowers, Jennifer Higdon, Camille Saint-Saëns, and Maurice Ravel. Audience members will feel and hear the amazing 6,134-pipe organ during the “Organ Symphony” and will be taken on a journey through the nation’s National Parks in Higdon’s All Things Majestic, in line with the season’s Celebration of Nature theme. The afternoon will be one to remember, especially for Emmy Award-winning composer Kris Bowers, who will be present for the WORLD PREMIERE of his violin concerto, For A Younger Self.

Commissioned by AYS, Bowers’ new work is the second installment of the Korngold Commission Project, developed and sponsored by AYS Board Member, Peter Mandell, and Advisory Council member, Sarah Coade Mandell, designed to unite great composers of film with top classical soloists to create and premiere new works. Bowers’ violin concerto, For A Younger Self, will be performed by sensational violin virtuoso, Charles Yang.

“I’m so thankful to AYS, Charles Yang and everyone at Disney Hall and the LA Phil for this opportunity,” said Bowers. “After a few conversations with Charles about possible themes to explore, this piece became a message to our younger selves about finding a sense of comfort and ‘home’ in new and uncomfortable environments, and striving for inner-peace in the trying times of our lives.”

We share Bowers’ program notes below, 10 days before his WORLD PREMIERE as a reminder to step outside of your comfort zone and be challenged to discover your inner-peace during trying times. Come experience the wonderful sounds from Walt Disney Concert Hall and be taken on a journey with AYS, Kris Bowers, and other incredible composers.

When I was first commissioned to write this Violin Concerto, I began speaking with Charles [Yang] about different ideas to explore. Both of us having moved to New York as teenagers to attend Juilliard, we reminisced about the feeling we had adjusting to a new and incredibly overwhelming environment, and how tough it can be as a young person to overcome fear, stress, self-doubt, etc. At the same time, I couldn’t help but feel a similar sense of excitement and being overwhelmed as I embarked on this commission. Growing up in Los Angeles, as a kid, having a concert work of mine performed on the Walt Disney Concert Hall stage seemed like something I could only dream about.

This space and this part of downtown L.A. has been an integral part of my young life. I started piano and theory lessons just across the street at the Colburn School the day they opened at that downtown location in 1998. I competed in the Spotlight Awards at the Dorothy Chandler Pavilion (as well as had my high school graduation there), and I performed here at Walt Disney Concert Hall with my high school jazz band. Being in these halls and on these stages made me incredibly excited about the possibilities for my future and my own potential as a musician. It helped me envision myself with a career doing this.

That being said, I was rarely in the audience for concerts in these spaces, and when I look back on my relationship with classical music, I always wish I had appreciated it more. On some level, I felt like I didn’t belong, and although I studied classical piano along side jazz until graduating high school, it seemed like classical music just wasn’t “for me.” As a young black boy, I didn’t see myself in the audience members, the classical composers that were presented, or even in the other students I was in school with. Not seeing myself in these spaces helped me create an internal narrative that I didn’t belong.

Film music began to change that for me. It wasn’t until I developed a deep love and appreciation for the film scores of composers like John Williams, Danny Elfman, Quincy Jones, John Powell, Howard Shore, and Jerry Goldsmith that I began listening back to classical and orchestral music, and really seeing/hearing where they were coming from. All of a sudden, the music of Ravel, Prokofiev, Beethoven, Brahms, Steve Reich, and others came alive for me, and although this field wasn’t much more diverse, it was a profound inspiration to see how these composers combined their personal musical styles with their classical training. Not to mention that at times, great storytelling can transcend race and gender, and I still found inspiration in the heroes of the films I watched as a kid.

This being my first concert work for orchestra, the shape and sound of the piece began to unravel throughout the composition process. Having learned so much about storytelling as a film composer, I wanted to see if I could convey a narrative through the shape and pacing of this piece. Using Charles and his violin as the protagonist, I wondered if there was a way for me to follow the format of The Hero’s Journey while at the same time adhering to the rules and traditions of the violin concerto.

When we meet our hero at the beginning of the piece, he is somewhat melancholic and timid, and pretty soon we feel he is almost being pushed around by the orchestra. The orchestra represents life in this way, and can be both the bully and the mentor. So we go back and forth between these moments of chaos and anxiety, to these gentler sections that represent the pining for tranquility, nostalgia, love, etc.

The second movement is a moment for our protagonist to finally have that moment of peace and reflection. It’s in this movement that we hit our “Mid-Point,” and our hero finally takes control of the narrative. He is now driving the orchestra, flowing through with much more ease and acting from a place of love rather than fear.

Lastly, we reach the climactic final movement in which the hero and what he’s learned is put to the test, and the ease in which he exhibits his self-confidence and assuredness amidst the chaos is on full display.

On some level, writing this piece became a way to send a message to the younger version of myself, in terms of finding a way to maintain balance and inner-peace in this chaotic and troubling world, and also as a way to encourage and celebrate my curiosity and love for so many types of music. I am so thankful to the American Youth Symphony and the LA Phil for this opportunity, which has helped me rewrite my own narrative that someone like me doesn’t belong in this space; performances like this can continue inspiring other young composers that have ever felt like they don’t belong. –Kris Bowers 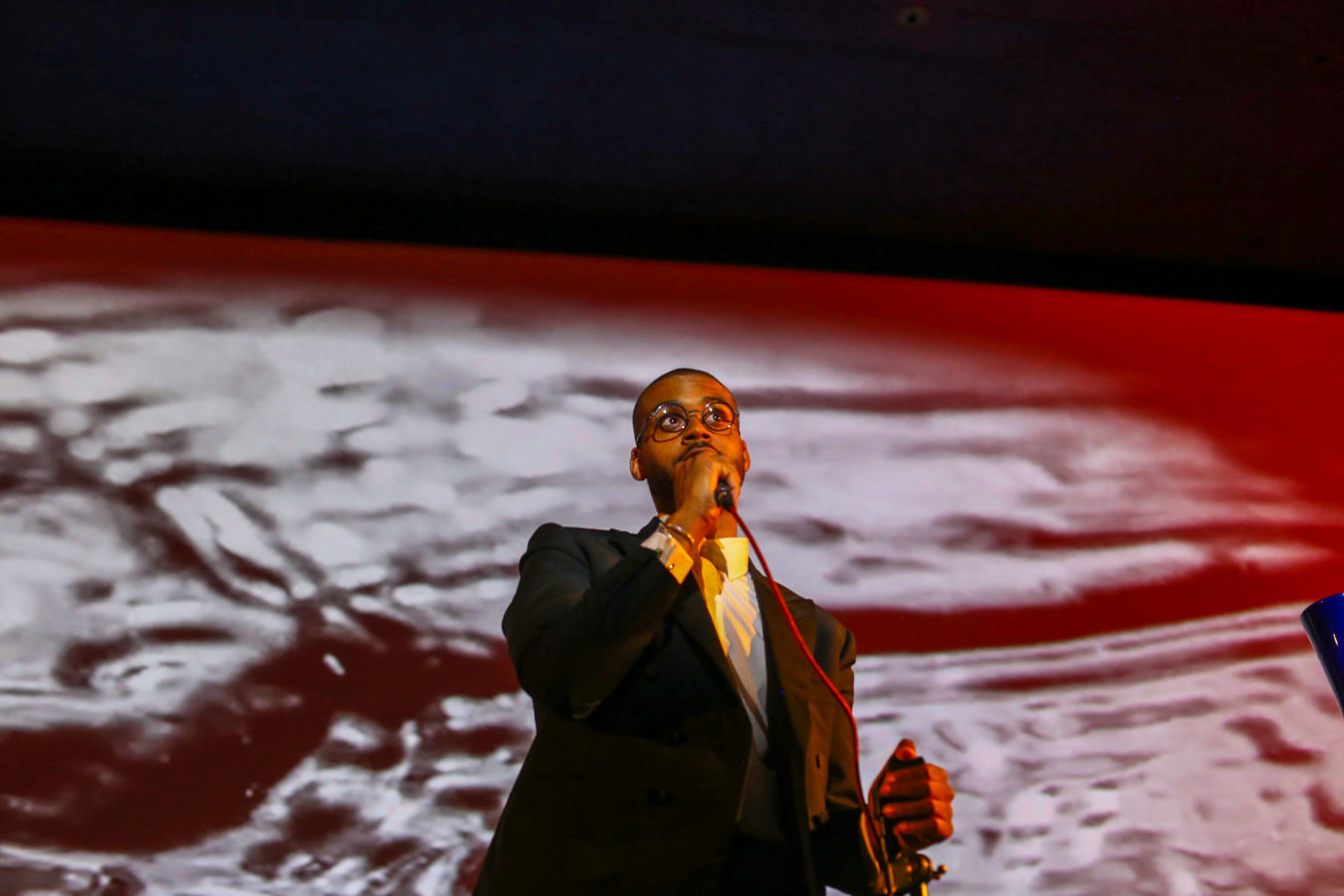 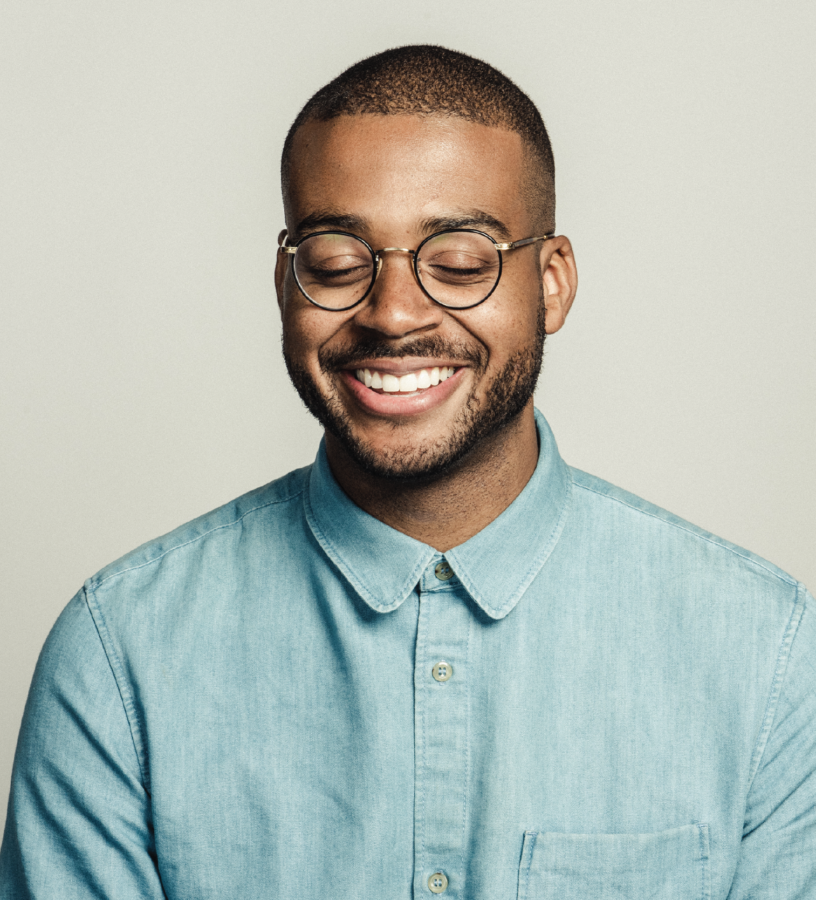 Emmy Award-winning composer and pianist Kris Bowers creates genre defying music that pays homage to his jazz roots with inflections of alternative and R&B influences. In 2011, Bowers won the Thelonious Monk International Jazz Piano Competition, which earned him a record deal with Concord Jazz, which later released his debut album, Heroes+Misfits. In 2014, the album opened at No. 1 on the iTunes jazz chart, followed by iTunes naming him as an Artist to Watch. In 2015, he was selected to participate in the Sundance Film Composers Lab at Skywalker Sound, followed by being selected in 2016 to perform at the White House for International Jazz Day. In 2018, Bowers collaborated with Emmy and Academy Award-winning director Peter Farrelly and Academy Award-winning actor Mahershala Ali on their critically acclaimed Green Book. Bowers’ work on Green Book led to a nomination for Best Score at the 2019 Critic’s Choice Awards, followed by Bowers receiving the ROBIE Pioneer Award from the Jackie Robinson Foundation. Bowers also scored Monsters and Men, which premiered at the 2018 Sundance Film Festival, and now appears in Ava DuVernay’s Netflix miniseries, When They See Us; most recently, that score has been EMMY nominated. Bowers’ original music and lyrics are featured in Madden NFL 19: Longshot, as well as the forthcoming Madden 2020. The Juilliard-educated pianist has established himself at the forefront of Hollywood’s emerging generation of composers, and throughout his career, Bowers has consistently championed an art practice guided by multi-disciplinary collaboration. Bowers currently lives in Los Angeles with his fiancée.