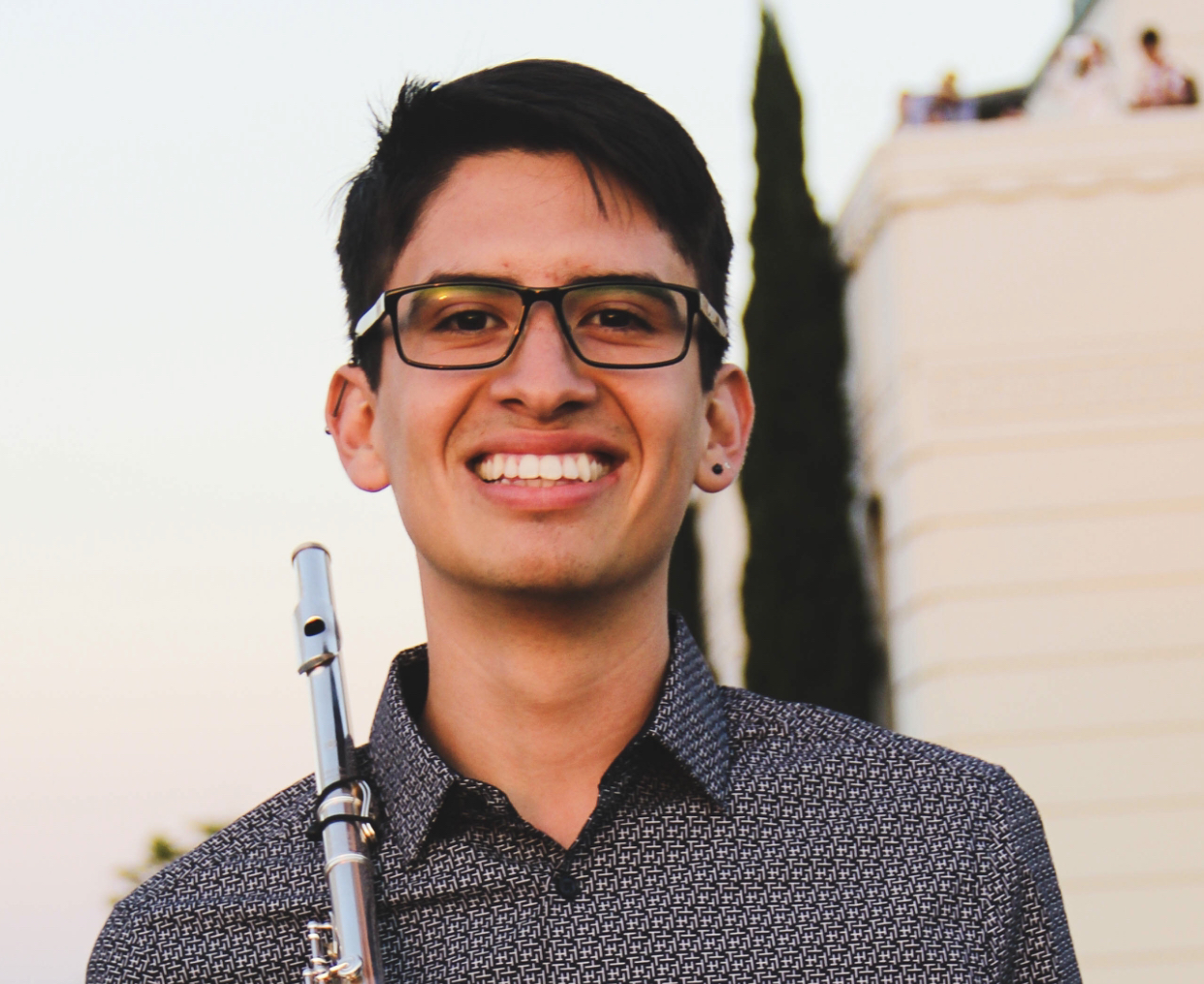 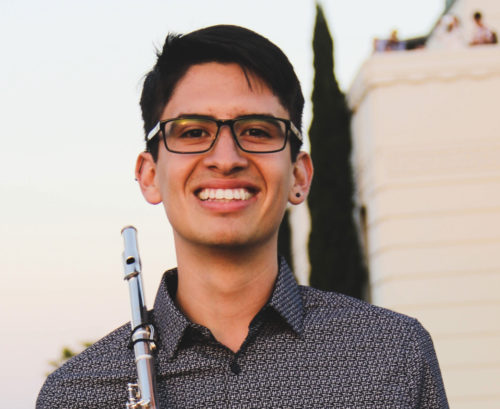 AYS Alumnus Devan Jaquez placed second in the impressive Sphinx Excerpt Competition this past February 2021—one of the many accomplishments he has earned after leaving AYS in 2019. He has been active as a flutist, seeking opportunities left and right, and takes the initiative to make his goals and dreams come true. Devan is no stranger to perseverance and sees each step of his progression as a growth opportunity.

Devan’s road to being a flutist was not a straight line. His musical journey started at the age of four with playing the piano. He then picked up the trumpet in his 5th grade band program, and later played the clarinet in middle school. Devan chuckled when he remembered the first time he picked up a flute. “In 7th grade, I went to target.com and bought a $100 flute, which was my first venture into the instrument.” However, in high school, he played the bass clarinet in band and oboe in orchestra before coming back to the flute. It’s clear that Devan’s love for music has been with him from the start, though it took a few years to finally land on pursuing the flute.

“I’ve always liked music—at the time, I thought it was very fun and I had a good time playing music.”

Though he experimented with multiple instruments, the flute became his favorite because of how naturally playing it came to him. He began taking the flute more seriously at the age of 17 when he started to consider being a professional flutist as a career. Devan’s first flute teacher was Tracy Harris, whom he met at a local music store after seeing a flyer promoting her flute workshop. “I played all these instruments and liked the flute the most. So, after I went to the workshop, I thought that this was really fun and exciting. Months later there were auditions happening for university so I went for it.”

Devan went on to pursue his BA in Flute Performance at UCLA after a mere six months of private lessons, and later graduated from Colburn Conservatory with his master’s in 2019. Though he started playing the flute much later than his peers, his work ethic and talents allowed him to be on the same level as other musicians.

Playing in AYS was a goal of Devan’s, and one he started pursuing while being a student at UCLA. After falling short at AYS auditions two years in a row, he persevered and was accepted after his third try in 2016.  He described that his participation in AYS was integral for shaping his career. “I think one of the best things about a program like AYS is the experience of playing in an orchestra because one, you have extra orchestra time, and two, you’re playing with those who have the same career trajectory and goals, so they’re putting in just as much work as you. Also, the level of musicianship is really high. It’s always inspiring to play with other people who sound so good.” That, in addition to playing a variety of repertoire and rehearsing under a professional schedule, gave Devan a taste of how his life would be as a professional musician in an orchestra.

Some of his favorite memories at AYS were performing the Rite of Spring and Daphnis and Chloe at Walt Disney Concert Hall. “It’s a beautiful hall and playing in there is always an experience; it looks beautiful and it sounds beautiful.” When he played, his family from La Habra came to watch him; being able to see him perform was a meaningful experience.

After AYS, Devan pursued various musical channels to further his career. However, the pandemic put a halt on many of his projects and orchestra auditions. Devan’s perseverance was once again tested, but proved to be stronger than the adversity he was facing in his musical career. One opportunity he found was a grant program from the Music Academy of the West’s Remote Learning Institute. He submitted a proposal for a solo flute album and received a small grant to commission new work for the album.

“While I was formulating this idea of what I wanted to do, I was looking through a bunch of music, listening to things that I liked, and contacting people that I knew who might know some composers my age. I just wanted artists to make music.” After seven months of emails, Zoom meetings, and music sampling, the album debuted in March 2021 featuring new music by Yaz Lancaster, inti figgis-vizueta, and J Diaz. One of Devan’s biggest takeaways from this experience was to use all of the connections he had in his network, whether big or small, because they might lead you to great opportunities. He advises other musicians to “just ask around. Because I didn’t know how many musicians were willing to work with me until I asked.”

Another huge opportunity that Devan found during the pandemic was the Sphinx Orchestral Partners Excerpt Competition. “I had participated in the National Alliance for Audition Support (NAAS) Audition Intensive, so I was familiar with the Sphinx program and what they were doing. When I saw the Sphinx Excerpt Competition being advertised, I was immediately interested in it.” In the beginning, Devan explained how he was unsure about what to expect from the competition since this was the first he had done online.  He went in with the mentality that he wanted to do well and learn more about his practice. “I wanted to receive feedback from professionals from all over the country and from different orchestras. It’s always really good to get other opinions and feedback on your playing, whether you agree with it or not.” To his surprise, Devan ended up placing second in the competition. A huge accomplishment that he (and AYS!) is extremely proud of.

As a result of his participation in the competition, various opportunities arose in ways he did not expect. “In the end, not only did I get the cash prizes but I was also invited to participate in Classical Tahoe, a music festival and fellowship happening this August (2021). I was advanced to the Navy Band’s semi-final audition and could skip the preliminary round, which was awesome since this was the first time that something like this happened to me. I was also asked to play in a couple of concerts as guest principal, which I will be doing this upcoming season.”

Besides winning competitions, being invited to exclusive auditions, and adding albums to his portfolio, Devan spends a lot of time teaching flute. He participated in Jumpstart Young Musicians Program, a program at the Colburn School for young people who don’t have access to learning music at their schools. “My favorite part about teaching the flute is working with students who also love music. When they’re enthusiastic about it, it’s really easy to bounce ideas off of each other, talk about music, and work with them to expand their thoughts on music.”

As a teacher, his philosophy is to aim for success, knowing that success may look different for everyone. “Being a successful flutist can be anywhere from wanting to play Disney songs to professionally in an orchestra.” He further explains how there are two sides to music: the first being the technical side and the second the musicianship side. “The technical side of music is like playing your scales, playing loud, and playing soft. The musicianship side is listening to music and talking about music so that you can make intentional decisions with the technique that you have acquired and make musical ideas come to fruition.” 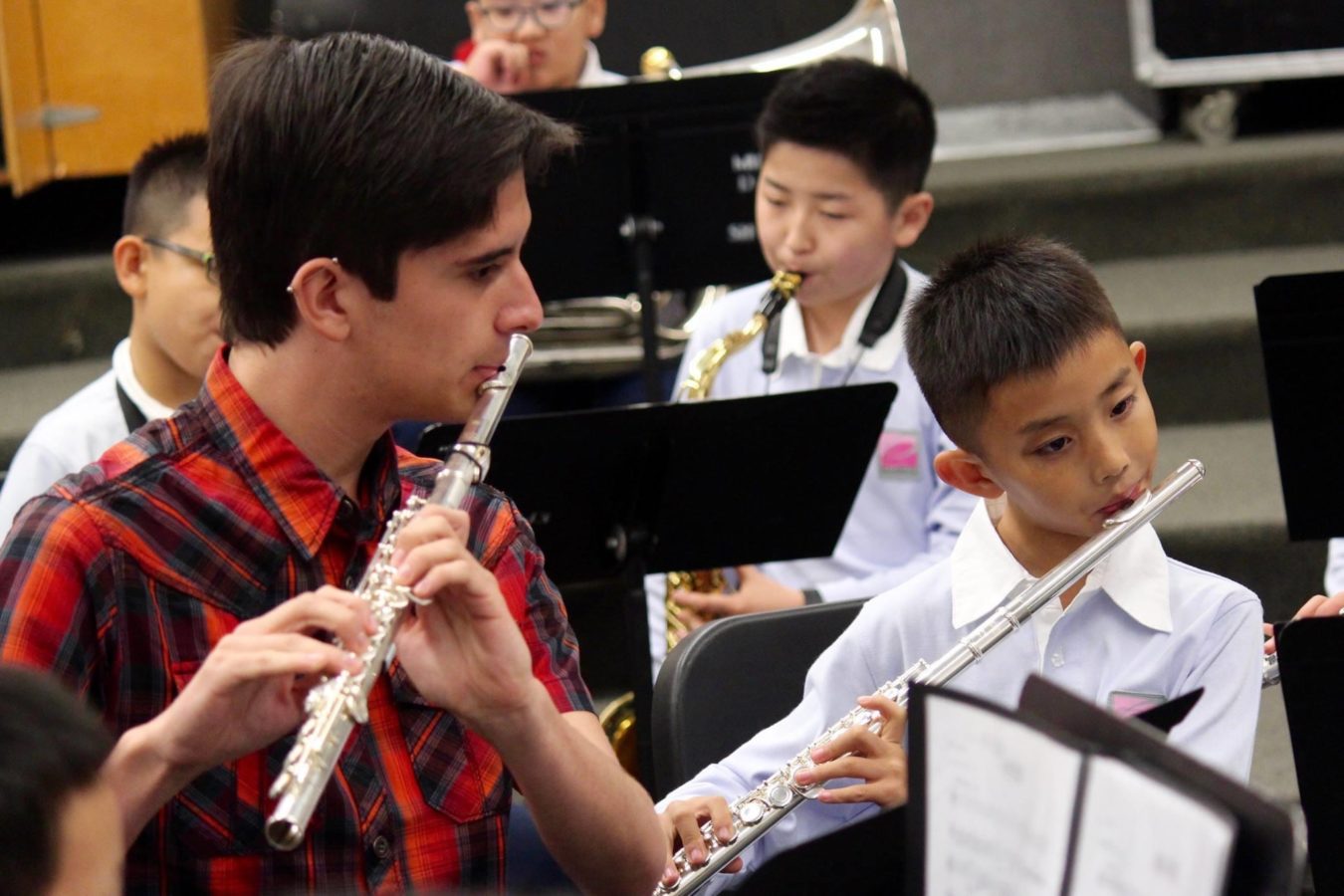 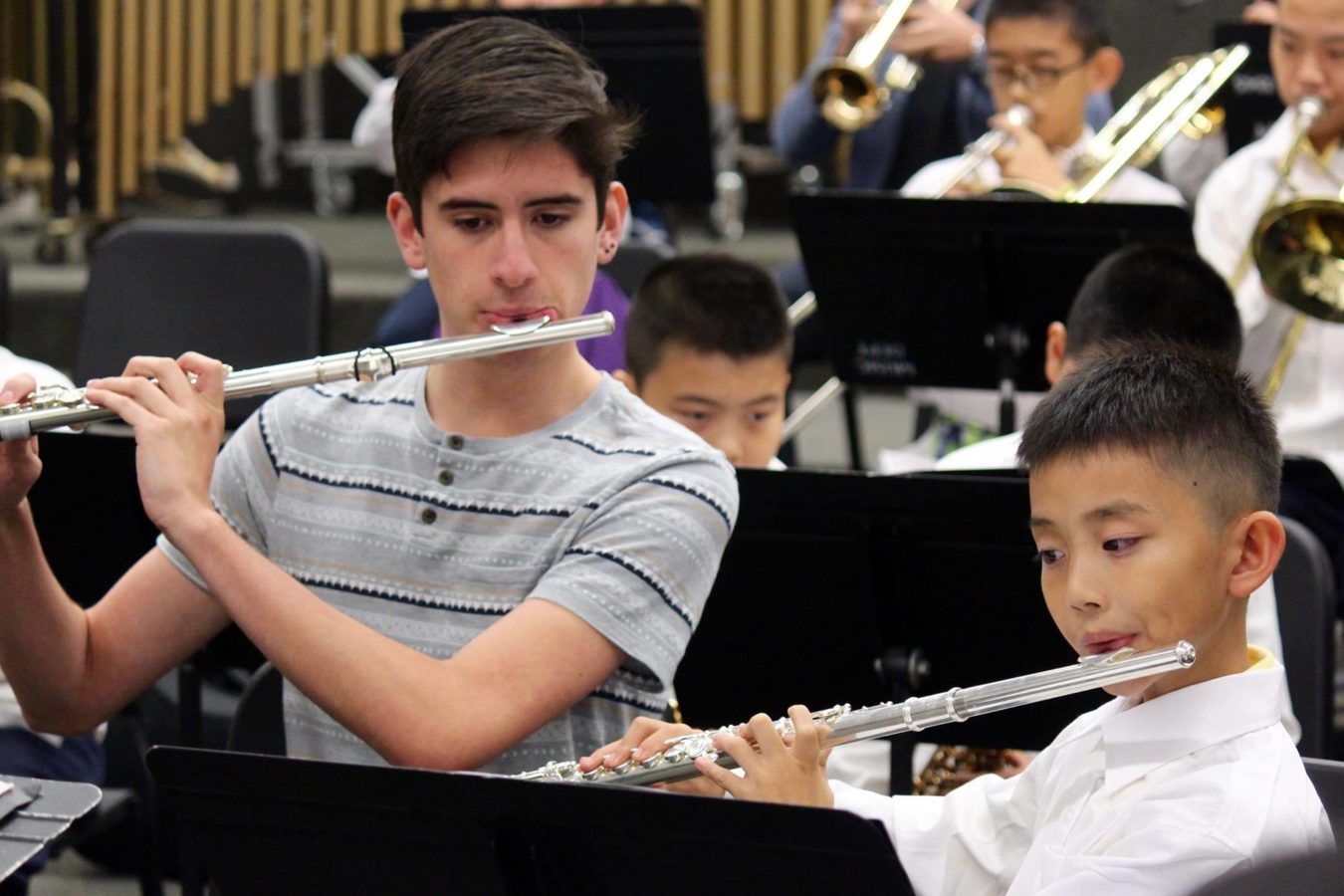 His approach to music also appears in his everyday life, such as his interest and background in studying linguistics. “For me, what was really exciting with music is how it shares some concepts with  linguistics: in linguistics there’s syntax and semantics. Syntax is how words are put together and semantics is what it means. In music you only have syntax: how music is put together. It has structure but there aren’t semantics. There’s no meaning to a C sharp on the clarinet.”

Devan’s future is promising as he merges his passion for flute with his interest in all art forms. He wants to continue using music as a platform to amplify the voices of communities that are often not heard and wants more people to share his love for music. As a fan of opera and playing in an orchestra, he hopes to have a career in either industry and wants to change the way people view classical music.

“I’ve always been a proponent of classical music culture being more of an exchange between performer and audience. I want to perform in flip-flops and have the audience talk to me, kind of like a social event. I want everyone to be having a good time.” He hopes that by making the culture of classical music more interactive and less formal, more people will be able to share his love for it. In his near future, he has plenty of auditions lined up to, hopefully, secure him a seat in a professional orchestra. We’re sure that Devan will not only excel in his auditions, but also take something out of each audition as an opportunity. 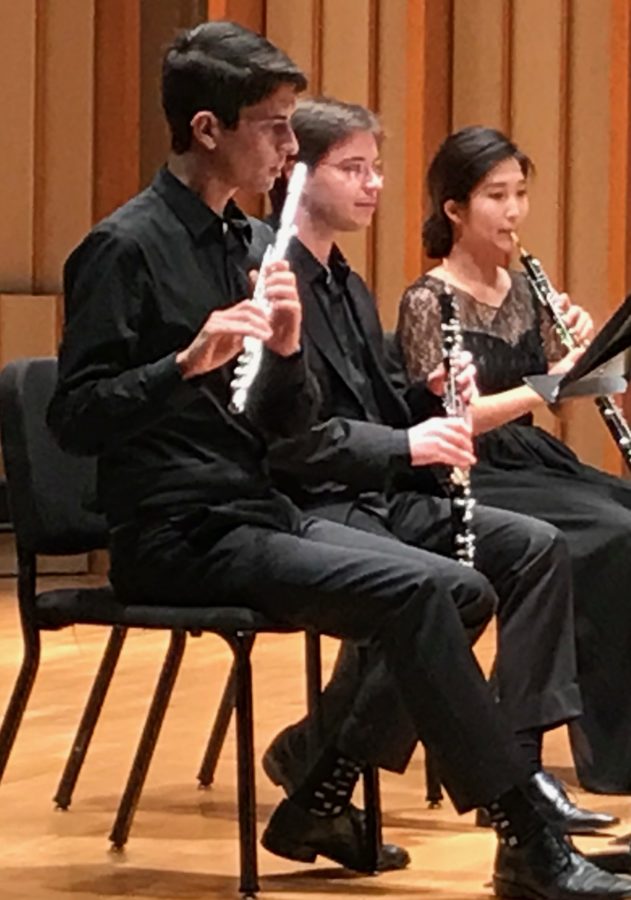 Devan Jaquez is a graduate of the Colburn Conservatory in Los Angeles where he received a Master of Music Degree in 2019 studying with Jim Walker. He received his Bachelor’s Degree of Art in Music Performance in the spring of 2017 from UCLA where he also received the Presser Scholar Award and studied with Sheridon Stokes.

While in Los Angeles, Devan worked as a freelance musician and premiered works by Esa-Pekka Salonen and William Kraft among others. He appeared in recital with revered oboe soloist and orchestral musician Ramón Ortega Quero while he was principal oboist with the Los Angeles Philharmonic for the Colburn Chamber Music Society 2018-2019 season. Devan Jaquez was a finalist in the 2020 Young Concert Artists International Competition. He was a 2020 instrumental fellow of the Music Academy of the West (MAW) and was a winner of the Keston MAX Competition—he will be appearing with the London Symphony Orchestra. Devan was also selected to play in the 2020 Spoleto Festival USA Orchestra. He was also part of the inaugural fellowship program at the Classical Tahoe Academy in the summer of 2021. He has played in the American Institute of Music, Graz Orchestra in Graz, Austria in 2019; the 2018 National Repertory Orchestra (NRO) in Breckenridge, Colorado; and was the 3rd Prize winner of the 2018 San Diego Flute Guild Young Artist Competition. He won the UCLA All-Star Concerto competition and appeared as a soloist with the UCLA Philharmonia Orchestra in their 2015-2016 season.

In addition to being an avid performer, Devan also enjoys teaching music and has served on faculty for the Jumpstart Young Musicians’ Program at the Colburn School and Soriel Music Academy in Los Angeles, CA. He is currently the flute teacher for the Roberson School of Music near Baltimore, Maryland where he currently resides. www.devanjaquez.com