Also, don’t forget to join us for our 13th Annual Hollywood Project Concert featuring John Powell’s captivating score to DreamWorks’ How to Train Your Dragon and Mason Bates’ Philharmonia Fantastique. Get your tickets here.

The AYS Hollywood Project tradition began as the Goldsmith Project and Elfman Projects, both of which were spearheaded by renowned film composer, conductor, and AYS Board Member, David Newman in conjunction with The Film Music Society, Jon Burlingame and Marilee Bradford.

The Goldsmith Project honored the work of American film composer Jerry Goldsmith and occurred during seasons 2008/09, 2009/10, and 2010/11. The first Goldsmith Project in 2008 took place at UCLA’s Royce Hall, where AYS performed excerpts from Planet of the Apes, A Patch of Blue, The Sand Pebbles, Patton, and The Blue Max, conducted by David Newman. In addition to the concert, AYS also produced “Jerry Goldsmith and The Twilight Zone”, a pre-concert symposium featuring the score to “The Invaders’ episode of the long-running sci-fi series, which AYS musicians played live to the film.

Two years later, AYS, guest conductor David Newman, and The Angeles Chorale collaborated to make The Goldsmith Project II in 2010 come to life. The program to the concert included selections from Music for Orchestra, Capricorn One, Papillon, Alien, QB VII, and The Omen. Goldsmith’s Music for Orchestra was also on the program, conducted by previous AYS Music Director, Alexander Treager.  Leonard Slatkin commissioned Goldsmith to write the piece for the St. Louis Symphony in 1970.

This concert paved the way for the Hollywood Project Concert series, as the selections from Alien were performed alongside the accompanying scenes from the film. This year also featured a pre-concert symposium and orchestra performance produced in partnership with The Film Music Society titled “John Steinbeck’s The Red Pony,” which was about a boy and his horse growing up on a California ranch.

The third Goldsmith Project in 2011 featured the soundtrack to Basic Instinct, Poltergeist, and Legend. Another symposium took place before, where the AYS orchestra played selections from Under Fire, a political thriller set during the last days of the 1979 Nicaraguan Revolution, under the direction of conductor David Newman. 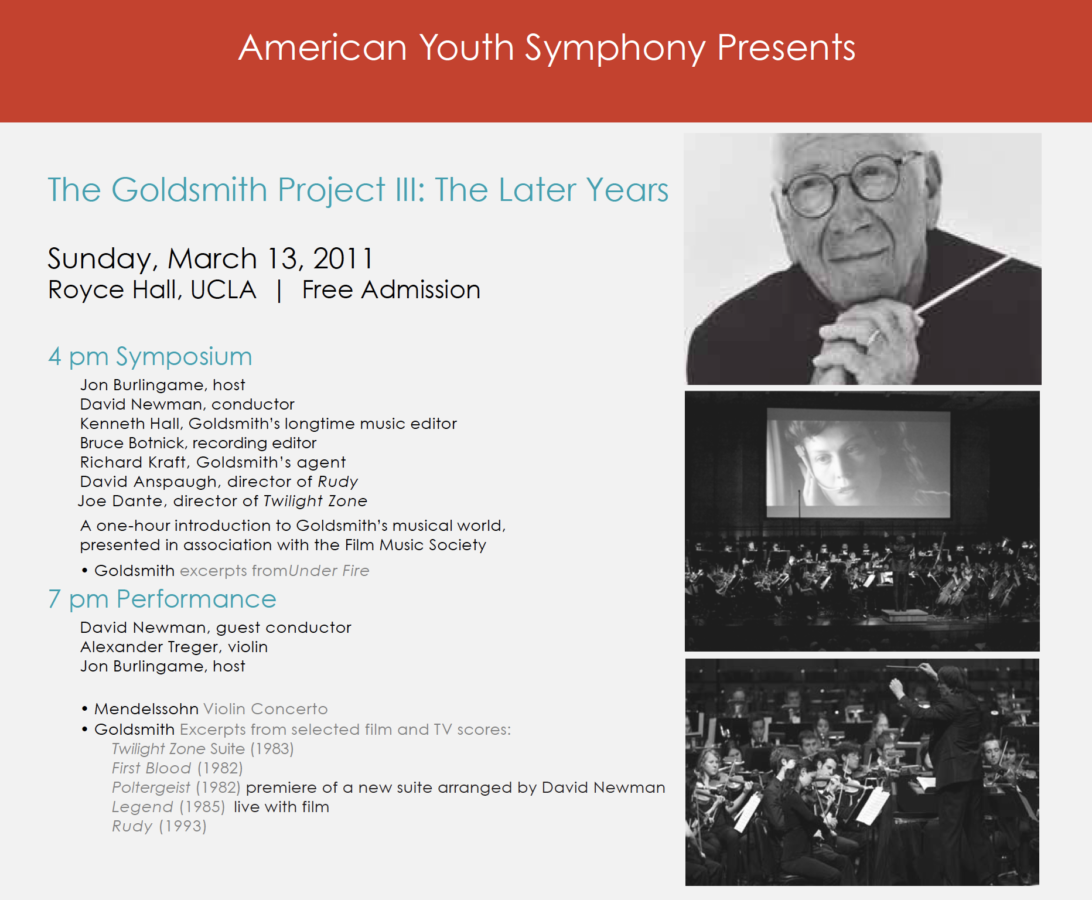 The Elfman Project followed, which featured three concerts each with their own symposium across three seasons: 2011/12, 2013/14, and 2014/15. The concerts honored singer-songwriter turned composer Danny Elfman, who is best known for his collaborations with filmmaker Tim Burton.

AYS’ then Music Director, Alexander Treager conducted the first half of the first Elfman Project in 2011, and conductor, David Newman led AYS for the second half of the concert. AYS performed excerpts from Edward Scissorhands, Sommersby, and Batman. The accompanying symposium, titled “Danny Elfman: Standard Operating Procedure” featured selections from the 2008 film Standard Operating Procedure, which detailed the torture and abuse of Iraqi prisoners by United States military personnel.

A year later, Alexander Treger and conductor David Newman returned to direct the orchestra for the second Elfman Project in 2013. Conductor David Newman led AYS during the film concert portion of the evening which included pieces from Oz the Great and Powerful, Big Fish, Alice in Wonderland, Spider-Man, Spider-Man 2, and Milk. The symposium featured Elfman’s “Overeager Overture.” 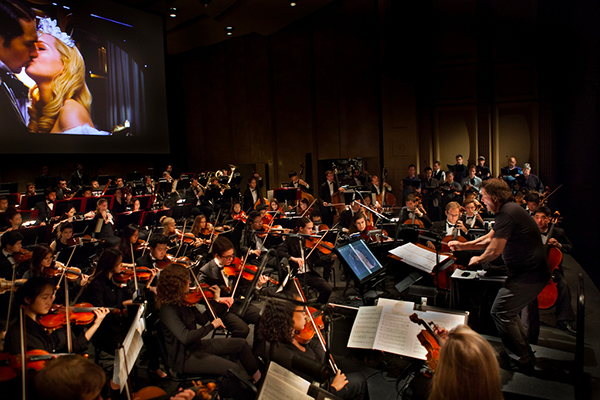 The last installment of the Elfman Project in 2014 was during AYS’ 50th anniversary season. Following the same model, conductor David Newman led the orchestra during the film concert pieces including Men in Black, The Family Man, Dolores Claiborne, Epic, Beetlejuice, Hitchcock, and Dick Tracy.

What made the Goldsmith and Elfman Projects different from other AYS concerts was how they brought together our musicians’ passion for music in film. AYS musicians were allowed to work with different pieces from modern composers, while audience members could experience a live-to-picture performance.

“I was concertmaster for the Danny Elfman project and vividly remember practicing and playing the scene where Edward Scissorhands gives a haircut. The magic of seeing the music link to the screen, and also the practical realization that movie music instrumentation does not consider the acoustics of a hall in balancing instruments! Many fun memories.”

“I played co principal Bass while I attended USC from 2010-2012. I really enjoyed the Danny Elfman concert and the other film score concerts we did….we did a lot…it was cool to meet the composer afterward. I treasure my time in Los Angeles. Working with AYS, Film composers, and other youth groups etc. were truly highlights of my time in CA.”

“Elfman Project! So fun those years! Playing with Steve Bartek too on an orchestral stage…was too fun!” 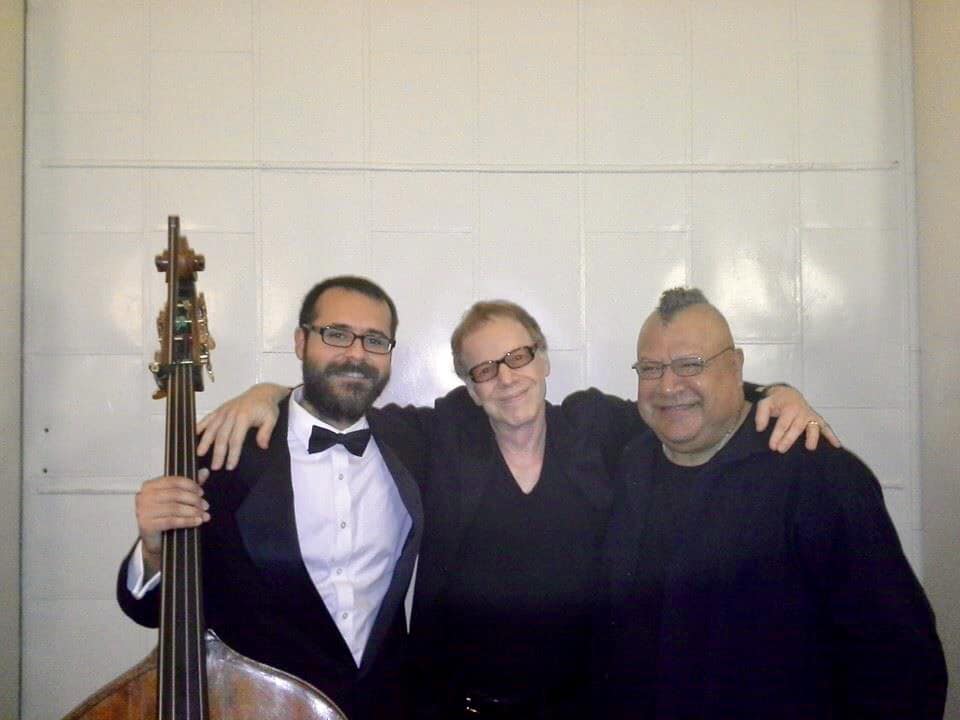 The Hollywood Project Concert officially came to be how we know it today during AYS’ 2015/16 season. Although refreshed and retitled, the Hollywood Project kept the tradition from The Goldsmith Project and The Elfman Project by having our orchestra accompany blockbuster films with their live scores. What made the Hollywood Project different this year was the performance of a full film score rather than clips from various films. Under the direction of conductor David Newman, AYS played the live-to-picture score to Star Trek Into Darkness, beginning to end. The film’s composer, Michael Giacchino, attended as a guest of honor, participating in a pre-concert Q&A and the first formal Hollywood Project Dinner (which was soon incorporated into the concert’s tradition). 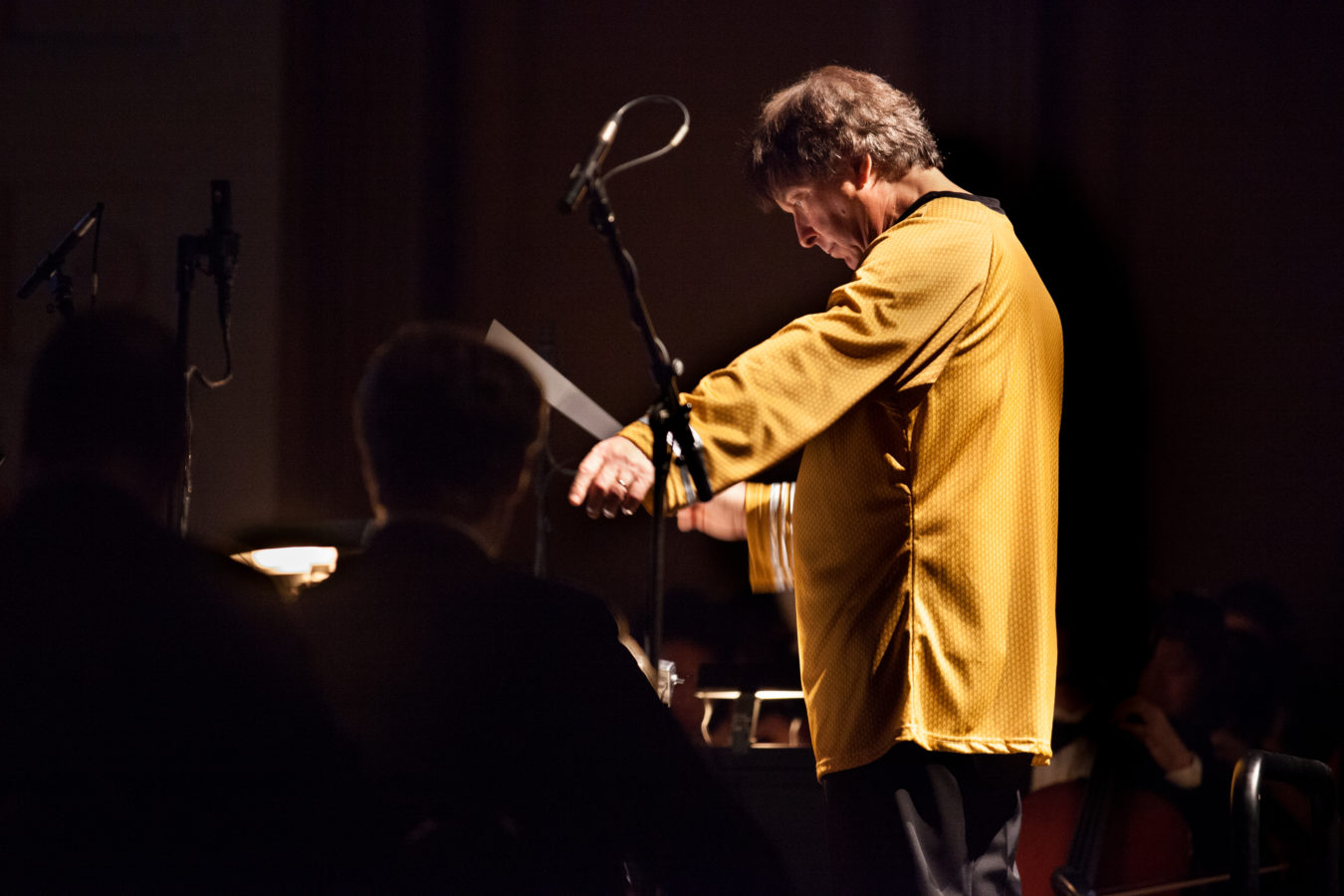 Conductor David Newman leading AYS during the performance of Star Trek Into Darkness. 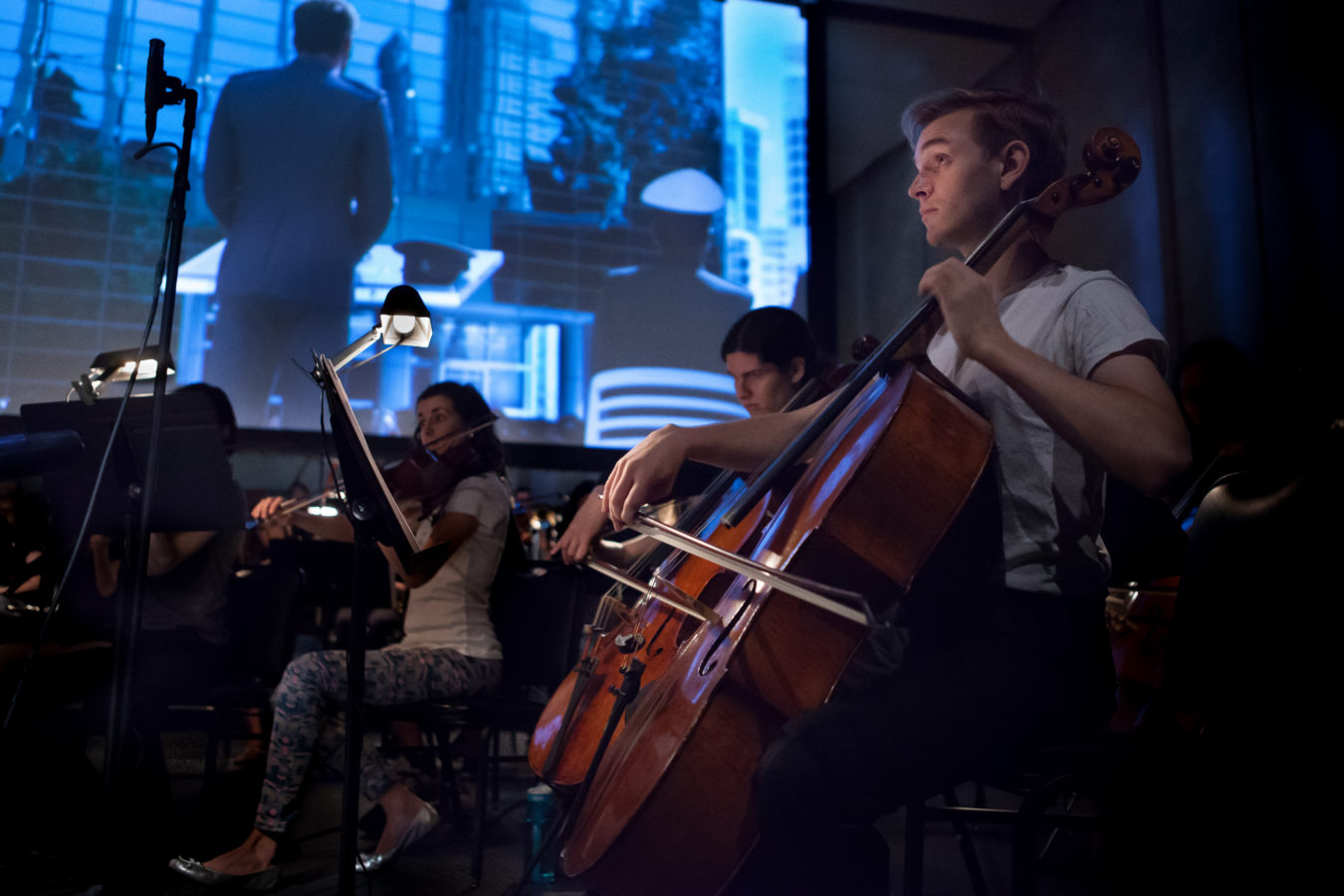 AYS cellist performing the score to Star Trek Into Darkness.

“Star Trek Into Darkness was the most memorable to me. I had just moved to LA with dreams of playing in the film score studios, so I was ecstatic to be playing film score. And not only were we playing a film score, but we were playing a film score directed by real film composers! I was completely star struck to work with David Newman and Michael Giacchino. David Newman composed the music to two of my favorite childhood movies: Anastasia and Matilda. I used to hum the clarinet solo from Matilda to myself when I felt lonely. And Michael Giacchino’s MM7th chords always make me emotional. haha I couldn’t resist fangirling to both of them. They were both very gracious, and Michael even took time after the concert to talk to me about USC and the horn octets he wrote while he was there. The Hollywood concerts weren’t only my favorite part of AYS, they were also some of my favorite parts of living in LA. Now that I play in a professional symphony, I do several live film score concerts each season. But none of them have the same magical feeling of arrival as that first Hollywood project.”

AYS performed the score Back to the Future, composed by Alan Silvestri, a classic 80’s movie about teen Marty Mcfly’s struggle to get back to his own time after he travels back to the 1950’s. Guests were encouraged to dress as characters from the film to win prizes at the after-party, which was, of course, appropriately 1980’s themed.

During his first season as AYS’ Music Director, Carlos Izcaray led our orchestra through the 10th annual Hollywood Project Concert as the musicians played John Williams’ score to E.T. The Extra-Terrestrial, another classic 80’s film about a gentle alien stranded on Earth and the children who befriend him.

“Performing in AYS’ Hollywood Project Concerts has always been exciting for me. My first AYS Hollywood Project Concert was ET, which was so meaningful to me. ET was one of my favorite movies growing up and playing John Williams’ music was so inspiring. I remember crying a little after the concert because I just couldn’t believe I was there. It’s the music that really makes the film. The music is real, it’s not trying to be anything else but itself, it’s not imitating anything, the music is the real magic behind movies.” – Elizabeth LaCoste, AYS Principal Flute 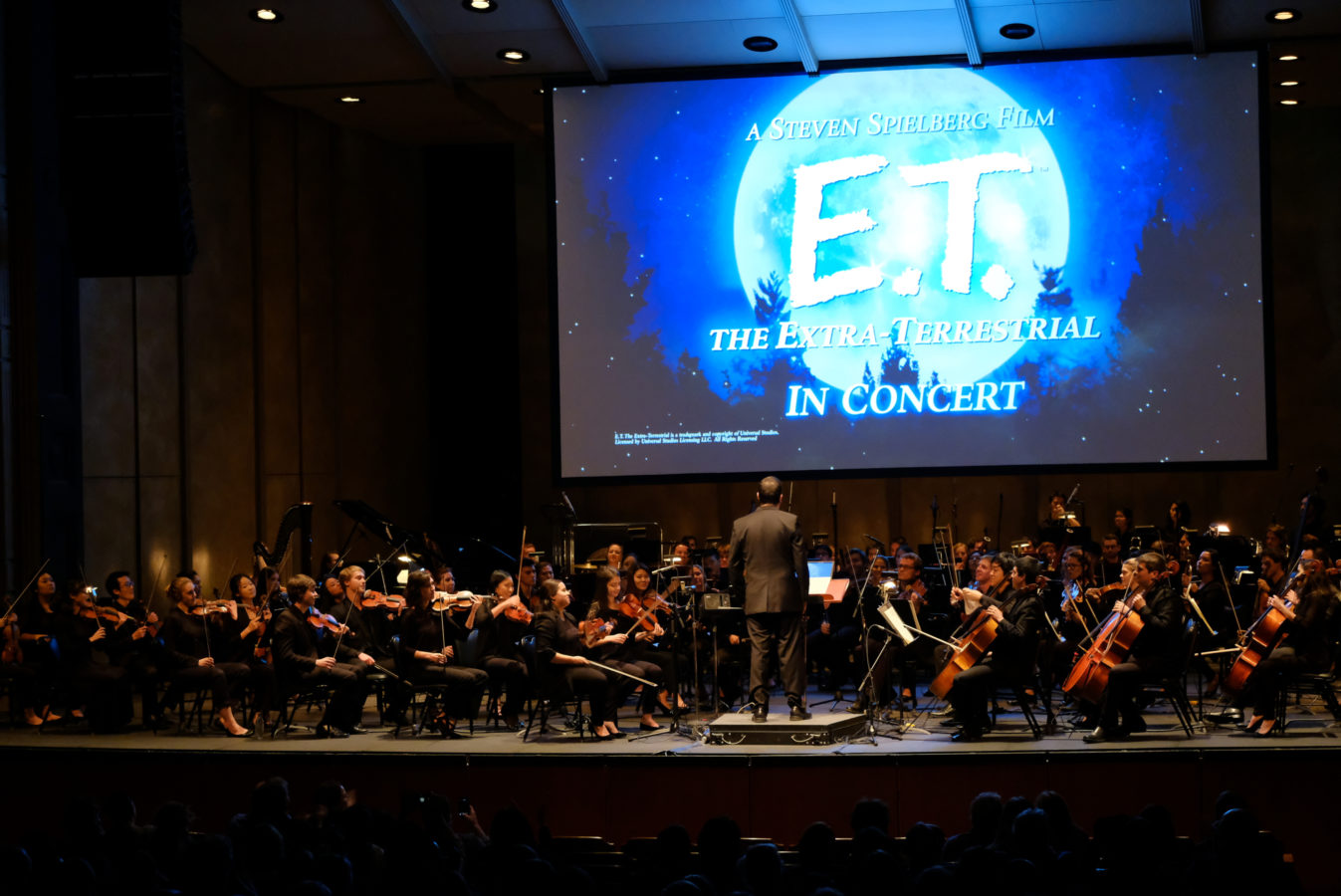 During the 2018/19 season, AYS performed another iconic John Williams’ score: Raiders of the Lost Ark, a movie from the Indiana Jones’ collection, which follows the journey of an archaeologist who competes with Nazis for the search of a religious artifact.

“Playing the live score to Raiders of the Lost Ark was an unforgettable experience! John Williams’ amazing score is full of drama and surprises. Nothing is more satisfying than taking an audience on a musical thrill ride, live-to-picture!” – Mark Gutierrez, AYS Bass Alumnus, 2015-2019 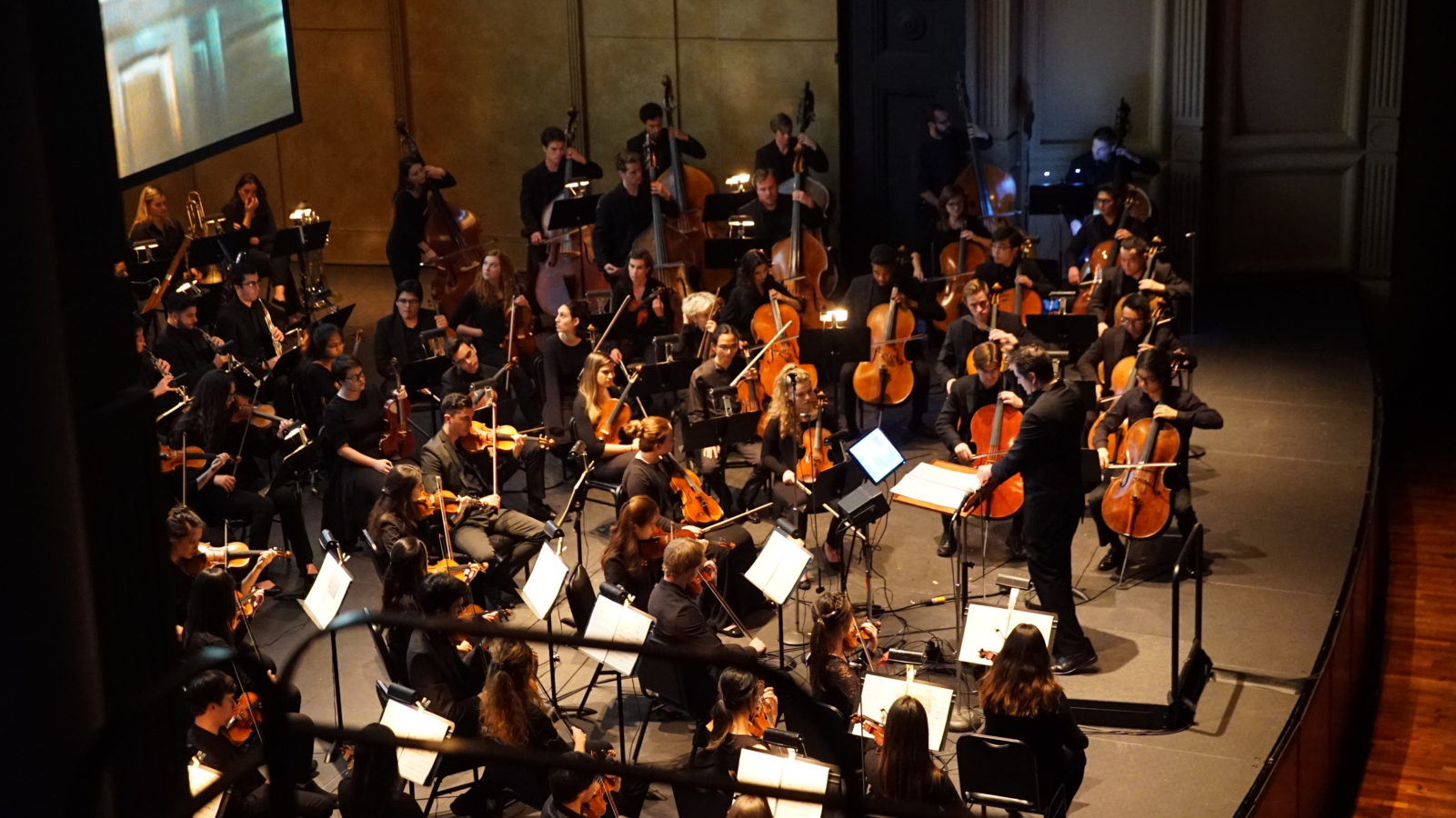 AYS Music Director, Carlos Izcaray leading the orchestra during Raiders of the Lost Ark in Concert. 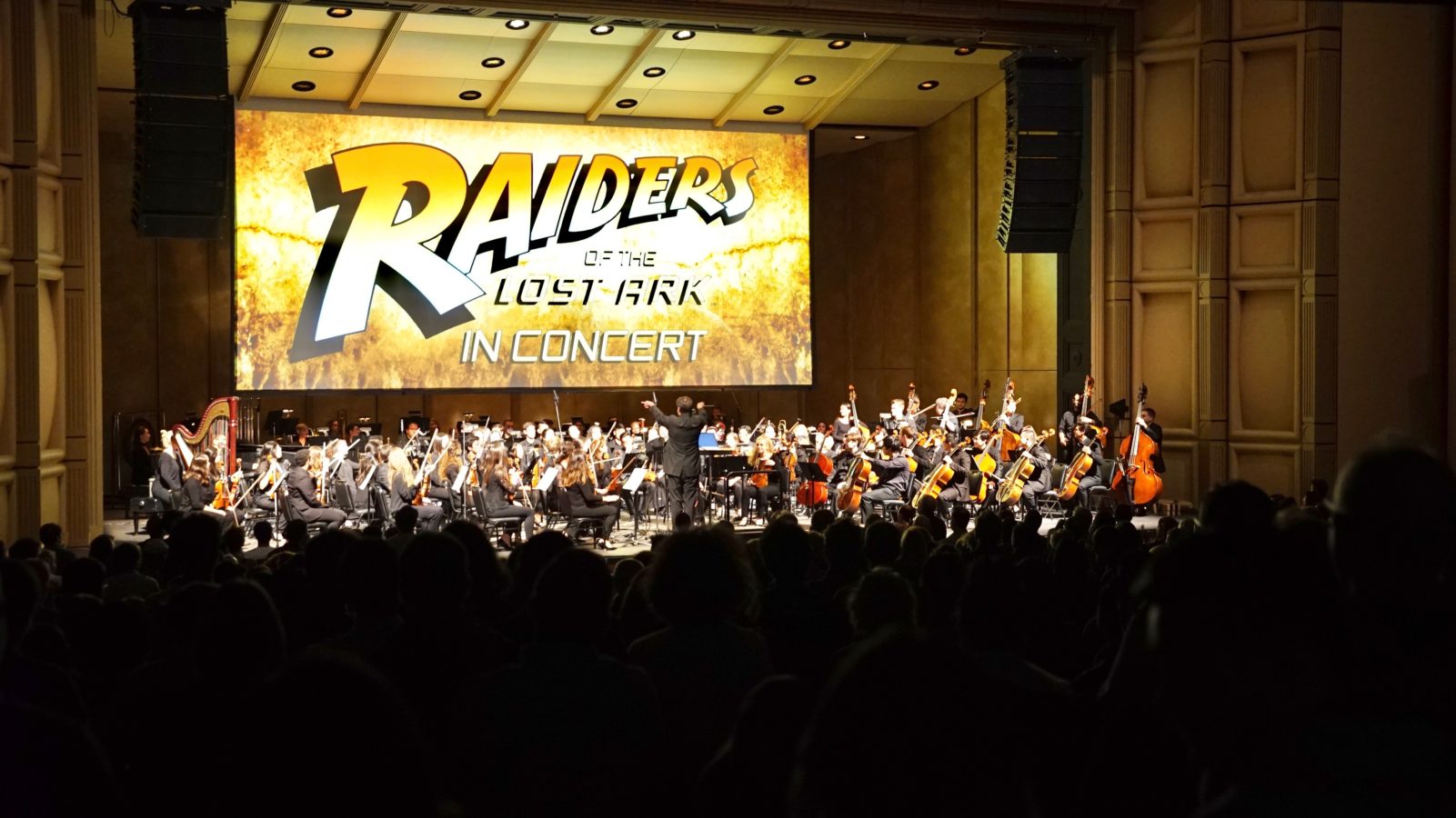 American Youth Symphony take the final note for Raiders of the Lost Ark in Concert.

The 12th Annual Hollywood Project Concert on November 23, 2019, honored James Horner’s incredible score for Apollo 13,  the true story of a NASA crew’s aborted moon landing and their fight to return safely to Earth. The film was intentionally chosen to coincide with the 50th anniversary of the first moonwalk, and was in memoriam of composer James Horner, who passed away five years earlier on June 22, 2015. Friends and family members of Mr. Horner came to his alma mater, UCLA, to hear his music played by AYS, led by Music Director, Carlos Izcaray. This was certainly a night to remember, and would be our last Hollywood Project Concert until 2021 due to the COVID-19 pandemic.

“The quality and professionalism of the AYS orchestra is so amazing that I forgot it was a young artist orchestra! Their work was so seamless, I forgot there was an orchestra in the hall.”

“The most memorable Hollywood Project score I remember was that of James Horner’s Apollo 13. The music rebuilds the same emotions that must have ensued in the real events portrayed in the movie. Each time we would anticipate the end, the suspense kept us on the edge of our seats, even as we waited to play that final musical progression, marking the miraculous return of our heroes, and the ecstatic expressions of relief from their families that always shook the audience with tears of joy.” 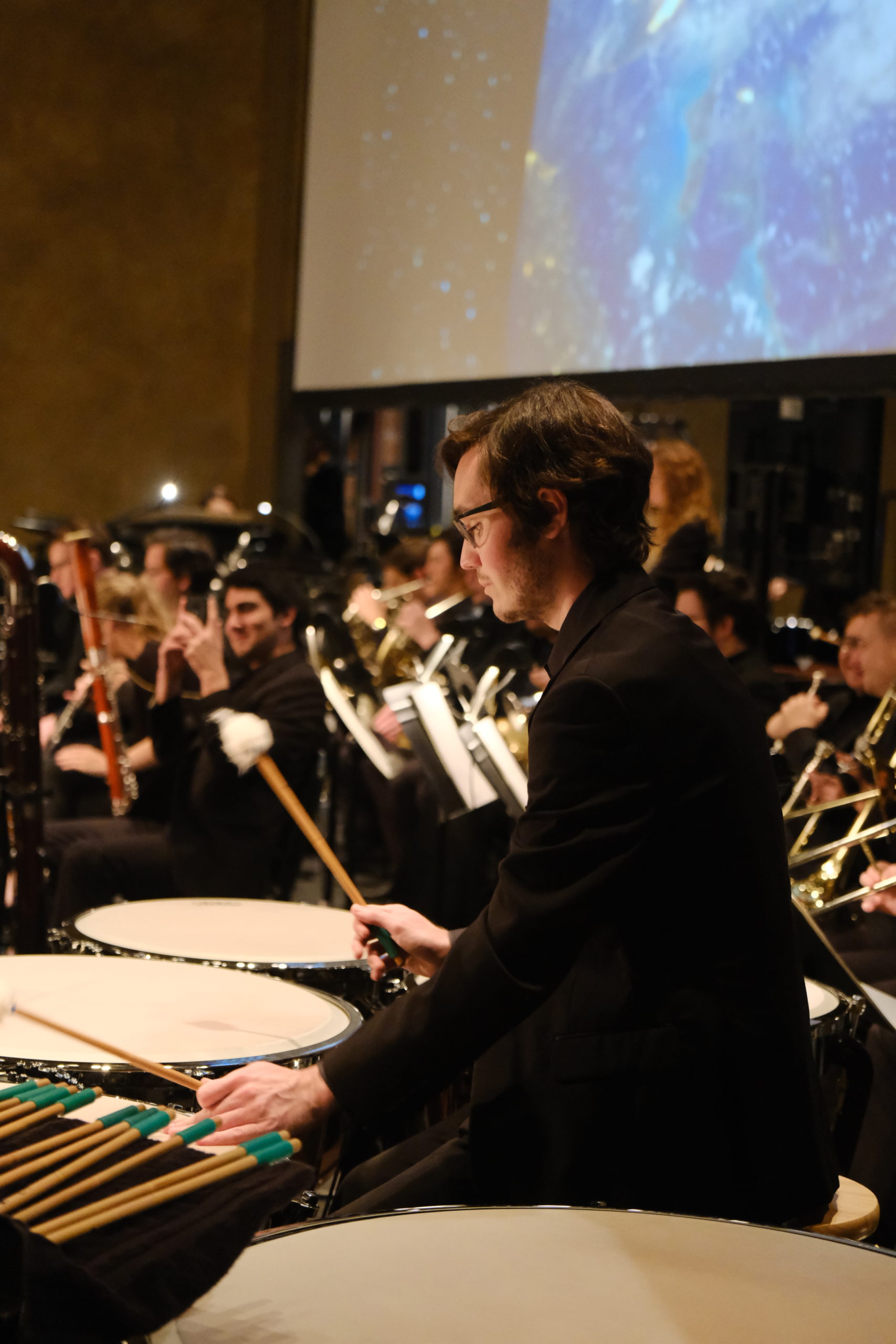 We were unable to host our annual Hollywood Project Concert during the 2020/21 season due to the pandemic. However, after a two-year hiatus, AYS and your favorite films return back to the stage on Saturday, November 6th 4:00pm at UCLA’s Royce Hall. This year’s program features Mason Bates’ Philharmonia Fantastique, a 20-minute film about the instruments of the orchestra, and John Powell’s Oscar®-nominated score to DreamWorks Animation’s How To Train Your Dragon under the direction of conductor Carlos Izcaray. We can’t wait to return to the concert hall and begin where we left off on our Annual Hollywood Project Concerts. Join us on Saturday, November 6th at UCLA’s Royce Hall as we make this historic return! Tickets can be purchased here on our website. 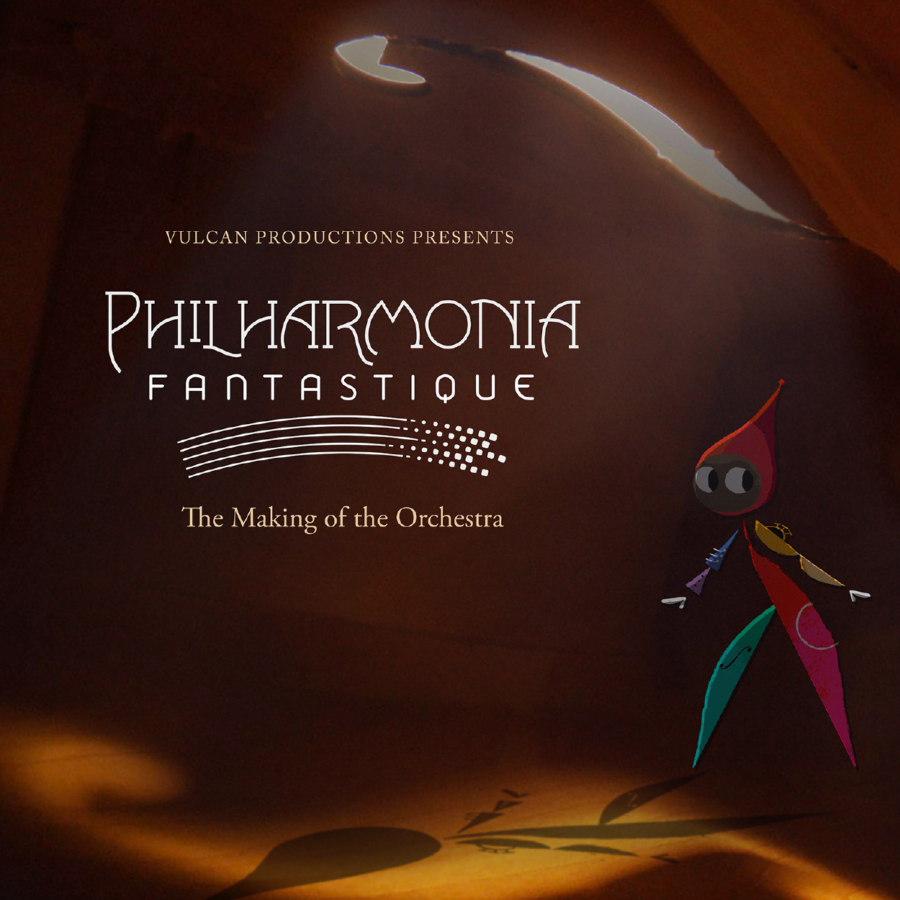 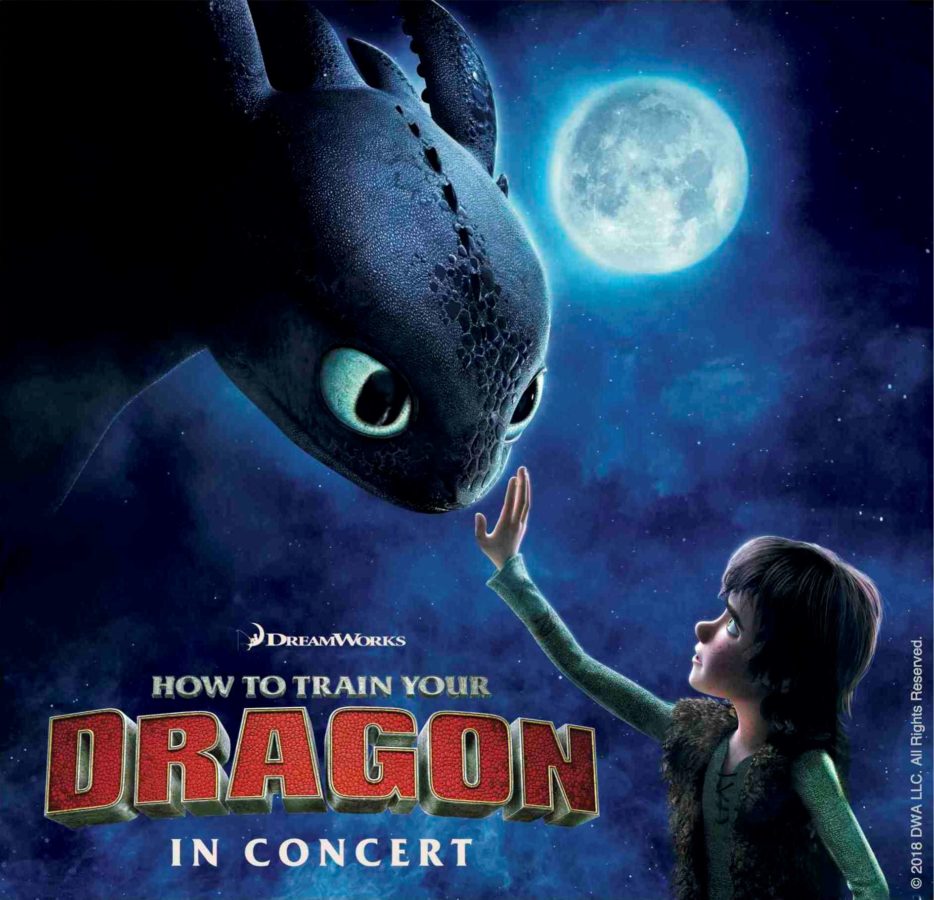