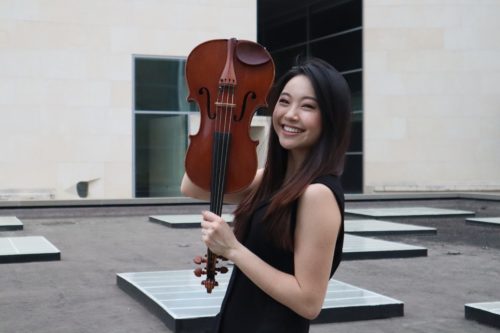 Talking to AYS Principal Viola, Katie Liu was a breath of fresh air. Katie’s story about exploring her many different interests and not following a direct plan was something I felt many of us could relate to, and also aspire for within ourselves. Our interview covers her inspiration for playing music, choice of switching from violin to viola, and her thoughts on identity. Read on to learn more about Katie!

Where are you from and how did you get started playing music?

I was born and raised in New Jersey, and more specifically from Budd Lake. My dad loves classical music and wanted to pass it on to me from an early age. He’s never played an instrument, but he has a huge appreciation for the art and developed a really good ear. I started playing violin at the age of five with my dad being my first teacher. Even though he doesn’t know how to play violin, he knows the art of teaching and understands music really well and laid a huge foundation to who I am today.

Growing up I always balanced music with my academic classes at school. I continued practicing violin at home over the years, and started participating in various orchestras in the area during my sophomore year of high school. I also attended Juilliard’s Pre-College program my junior and senior year and drove to New York every Saturday to learn from their faculty. At the same time, I was really involved with my academic curriculum at my school.

Though I loved music, I ended up deciding to major in Operations Research and Financial Engineering during my undergrad at Princeton University and still participated in musical opportunities while there. I’m now pursuing my masters at the Colburn School in viola, so much has changed since then!

Yes! We would love to learn more about what influenced you to change your primary instrument of violin to viola?

When I started going to Princeton, I didn’t really play violin much because I was focusing on my academic classes. I pretty much stopped playing, but then I missed music because it’s always been a part of my life and I wanted to take the chance to try something new. For no particular reason, I picked up the viola my sophomore year and found myself playing more viola with the musical opportunities I had. I started to play viola more in orchestra and in the chamber groups I was a part of and realized that viola fit more of my personality than violin.

As I played more, I discovered more of my musical voice with viola – I love its sound. The violin is more virtuosic and plays more brilliant tones, whereas I prefer to play the mellow and warmer parts in music.

After winning Princeton’s concerto competition with my friend, we had the opportunity to play Mozart’s Sinfonia Concertante, a violin and viola duet, with the Princeton University Orchestra. Working with the viola on this piece brought me so much joy, and made me start to consider continuing my education on this instrument. I finally committed to this decision in fall of my senior year, and that’s when I applied to Colburn for my master’s and moved to Los Angeles. 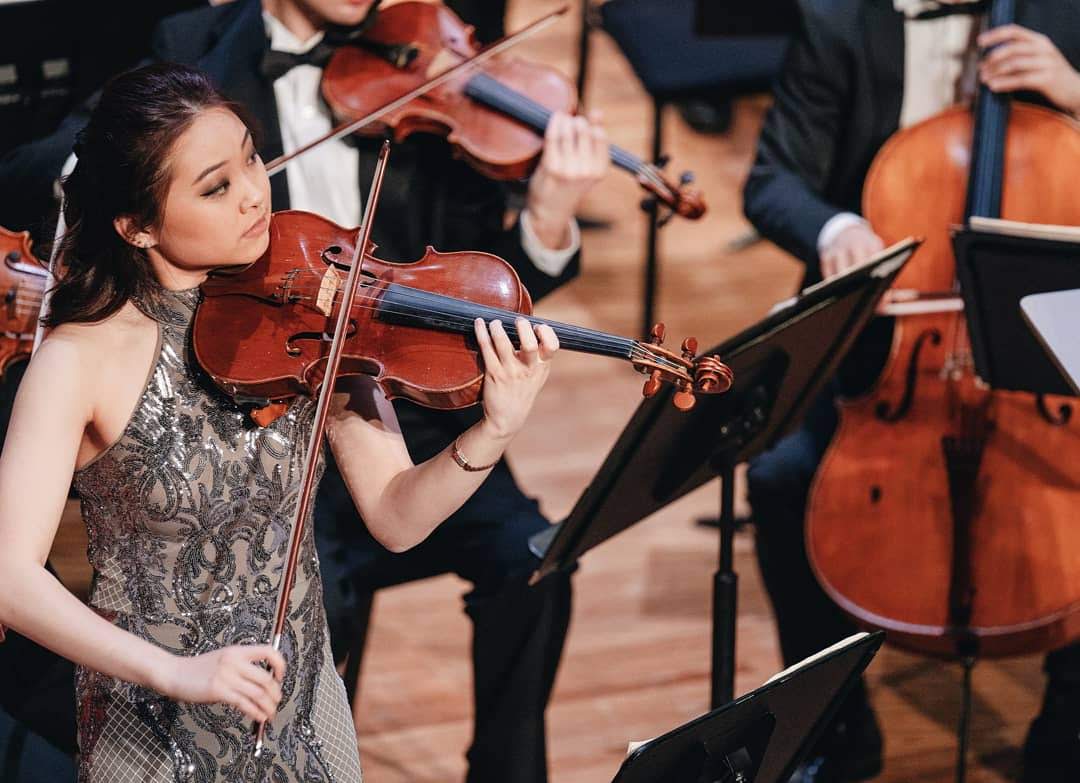 I saw that your Senior thesis at Princeton was about the intersection of classical music and recognition techniques, machine learning, and neural networks. I would love to hear more of your research, and how your operations research and financial engineering studies connect with classical music.

The neural network used to identify these patterns learns on its own with training data. Therefore, no existing (and lackluster) database is needed, because the new algorithm could identify patterns and categories on its own. My thesis wrote the theoretical code for this that could work in a real-life application.

You are now pursuing your masters at Colburn Conservatory in viola performance. What prompted this focus, and how is it going?

After spending so much time on my academics and other interests, I realized that I wanted to spend more time on my music making since I’ve never dedicated myself fully to it. I didn’t expect this for myself, because I initially was so sure that I was going into finance, but I’m really happy I’m here at Colburn. It’s been really liberating for me because I’ve never created this time for myself to just focus on music.

At first, my plan was to go here for two years, but at Colburn, I’ve found such an amazing community and now am heavily considering staying in this industry for the time being. Although I don’t have a concrete plan, I’ve learned that it’s okay to be uncertain, have other interests, and create a balance in my life.  I really love Colburn, Los Angeles, and the musical opportunities I have out here including AYS.

Tell us about your recent December 2021 concerto performance with the Colburn Orchestra. What was your process for preparing for the concert?

I played Hindemith’s Kammermusik No. 5, which was a crazy piece but so much fun for me! It was exhilarating. This piece is completely chaotic which aligns with my personality a little bit, and how I actually prepared for the performance. I think I learned this piece pretty sporadically starting in October, but had to seriously start practicing it a few weeks before the concert.

I’m still working on my personal process for how to learn a piece. Understanding the personality of the piece is really important and something I’m still working on. Whenever I’m learning a new piece I always ask myself: how do I bring out what the composer wanted to say, and how do I make it my own? 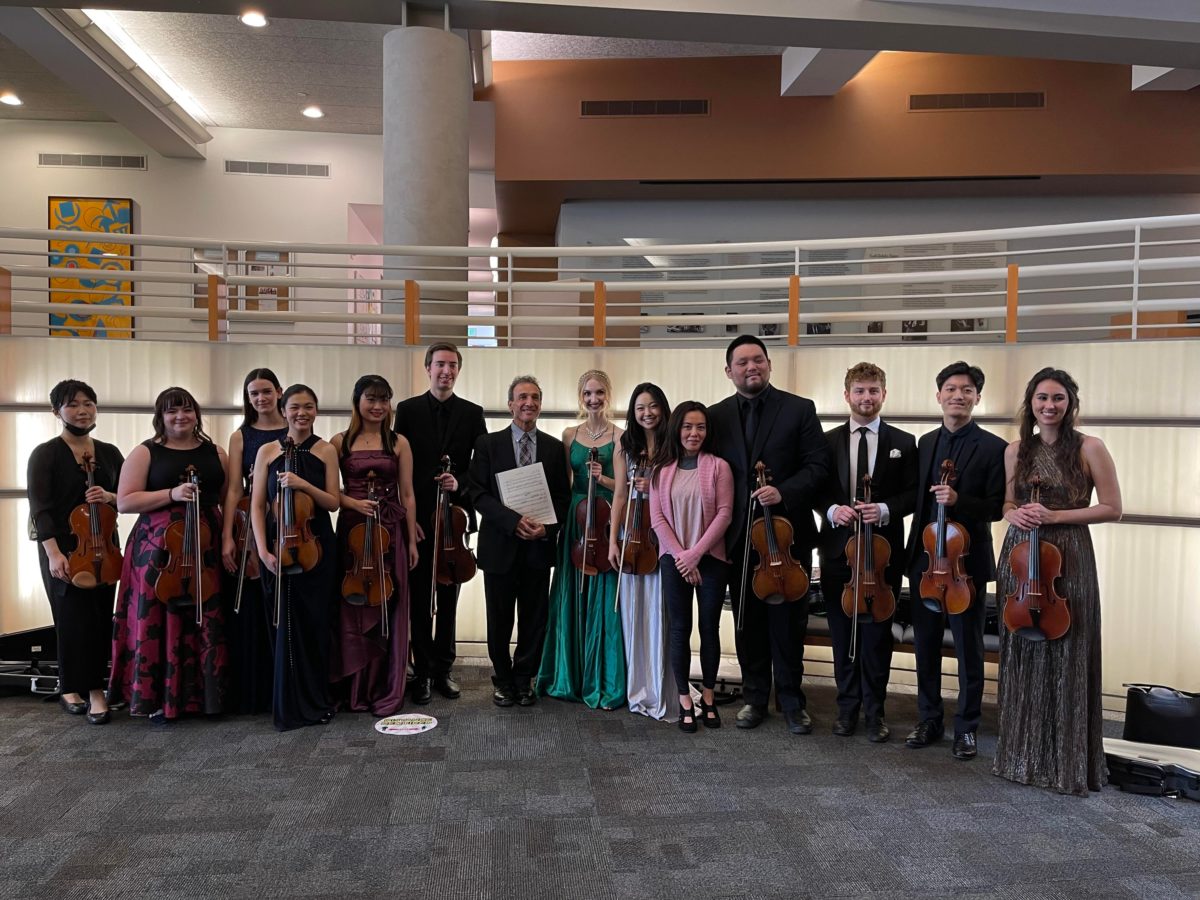 Katie (6 from right) with other Colburn students at Colburn Conservatory. 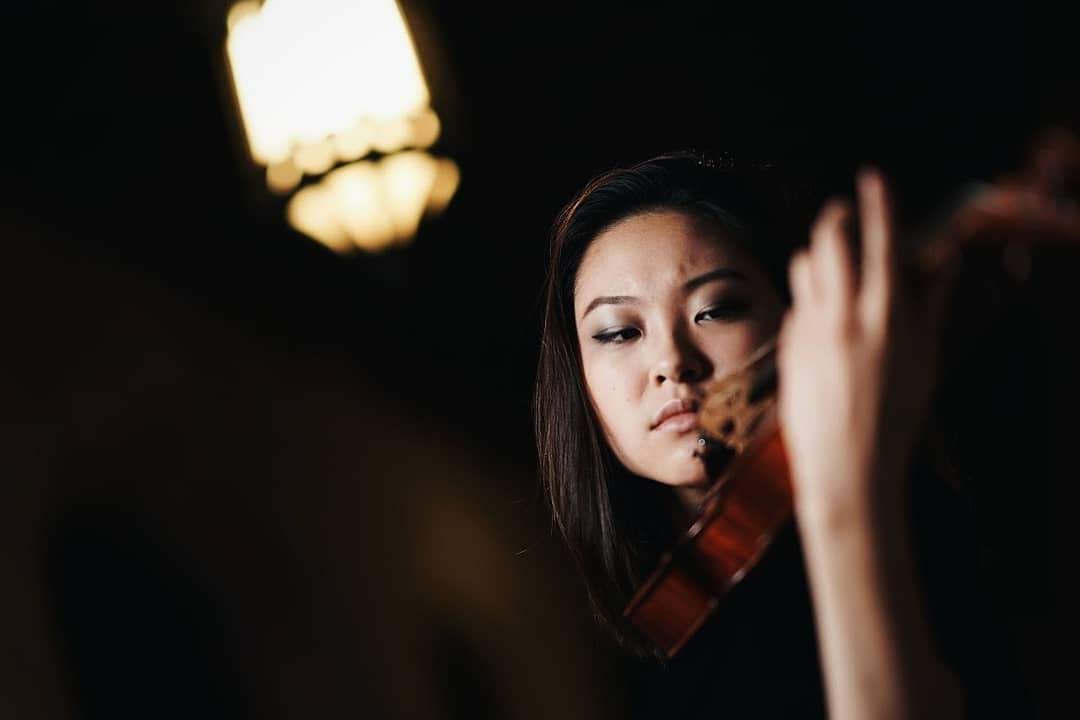 Katie with her viola.

Tell us about your experience playing with AYS this season.

I joined AYS back in September 2020 which was when mostly everything was online, including Colburn. Because of this, I was still in New Jersey and didn’t actually perform with AYS in-person until the start of this season in September 2021, which has been so busy! I played in all of our orchestra concerts so far including Opening Night, The Wizard of Oz performance at the new Academy Museum, and the 13th Annual Hollywood Project where we played the score to How to Train Your Dragon.

Out of the three concerts, I enjoyed playing the How To Train Your Dragon score the most. It was my first time playing a live-to-picture concert and it was so cool to me to see how classical music and what I do intersects with so many different fields and with the film industry. I loved playing the music and seeing the scene that it coincided with. The music was really hard, but so rewarding and fun to play!

What has AYS taught you about the classical music industry, playing in a large orchestra, or about yourself?

I really love the community in AYS. I enjoy coming to rehearsals and seeing my friends and colleagues in the viola and violin sections. AYS is not only about playing the music, but also about being with like-minded peers who enjoy playing music as well. It’s been really rewarding so far, and I’ve loved having a new community of people and building it.

What are your hopes for the classical music industry?

I have a few ideas, but my first idea is to expand the repertoire to include a variety of people that come from many different communities and identities. I think the field needs to broaden their scope of composers and learn from and about new voices in the field. There’s a lot of work to be done here, but all we can do is move forward. For example, whenever my friends and I have the opportunity to program our own music we do research on women and BIPOC composers and prioritize them. I’m hoping larger ensembles and orchestras start to do the same.

Where would you like to see your musical career go?

For the immediate future, I’m auditioning for artist diploma degrees to continue my education. Beyond that, I honestly don’t have much of a plan besides exploring different jobs that intersect with music including administration, consulting, or being a lawyer in the music field. I’ve realized that your identity doesn’t have to be what you do in your life and it’s a matter of how I balance all of my interests and goals.

What is your source of inspiration for playing music?

This is hard to explain for me, because it’s hard to give a tangible reason why I love what I do. Playing music is part of my identity and something that has always stuck with me. It also gives me really fond memories of spending time with my dad.

What are your top artists and songs on your Spotify right now?

I honestly tend to put things on repeat pretty aggressively, so my music is mostly limited to a few artists that I listen to a lot. The genre is mostly Indie-pop, with Oh Wonder, SYML, and Taylor Swift being at the top! 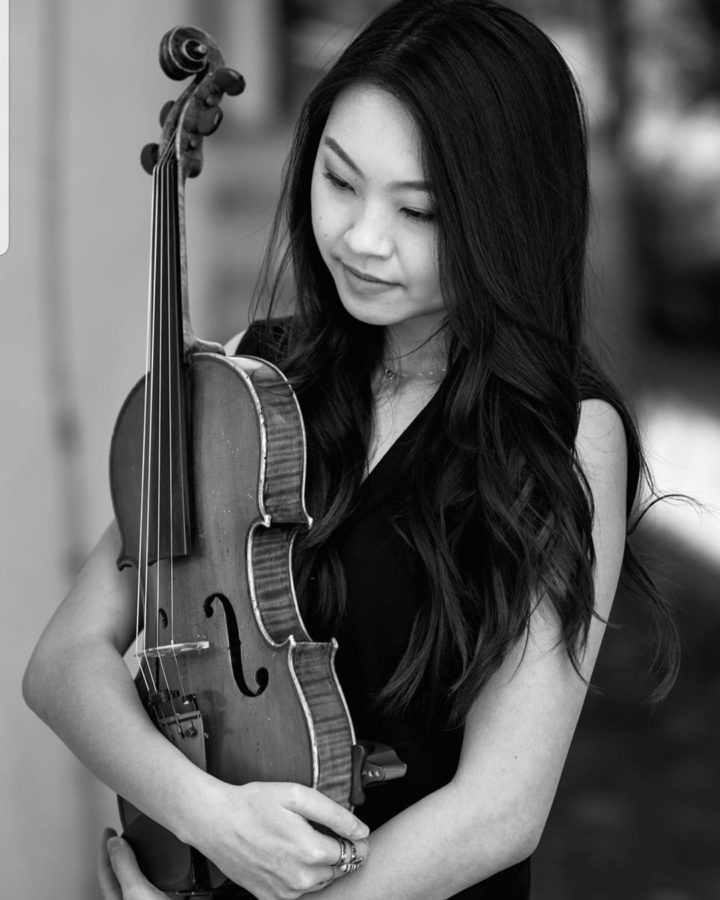 Born and raised in New Jersey, Katie Liu is a Master of Music Candidate at The Colburn School in the studio of Paul Coletti. She received her undergraduate degree from Princeton University ’20, concentrating in Operations Research and Financial Engineering with certificates in Computer Science and Musical Performance. She picked up the violin at age 5 and the viola in January of 2018 on a whim, instantly falling in love with the instrument.

In her early violin years, she studied with Duoming Ba of the New York Philharmonic, and is an alumna of The Juilliard School Pre-College Division ‘16, where she studied with Masao Kawasaki. She served as concertmaster of the Bravura Youth Orchestra and won numerous competitions, performing extensively and soloing with the Bravura Philharmonic, New Jersey Youth Orchestra, and the Summit Symphony. She was a prize winner of the National YoungArts Foundation in 2015.

Katie made her solo viola debut in 2019 with the Princeton University Orchestra as a winner of the Princeton University Concerto Competition and toured with Swedish pianist Per Tengstrand in his Beethoven Safari tour in August 2019. In her time at Princeton, she performed with both the Richardson Chamber Players and the New York Piano Society as a guest artist and has held principal positions on both instruments in the Princeton University Orchestra. She studied with Eric Wyrick on both violin and viola, and was an active member of Opus, the campus chamber group. Aside from her musical pursuits, Katie has also had summer working experiences in asset management, and wrote her senior thesis on the intersection of classical music recognition techniques, machine learning, and neural networks.

She is currently the Principal Violist of the American Youth Symphony for its upcoming seasons, and previously attended the New York String Orchestra Seminar in December of 2020. In the summer of 2021, Katie attended the Gstaad Menuhin Festival String Academy and worked in FinTech consulting.