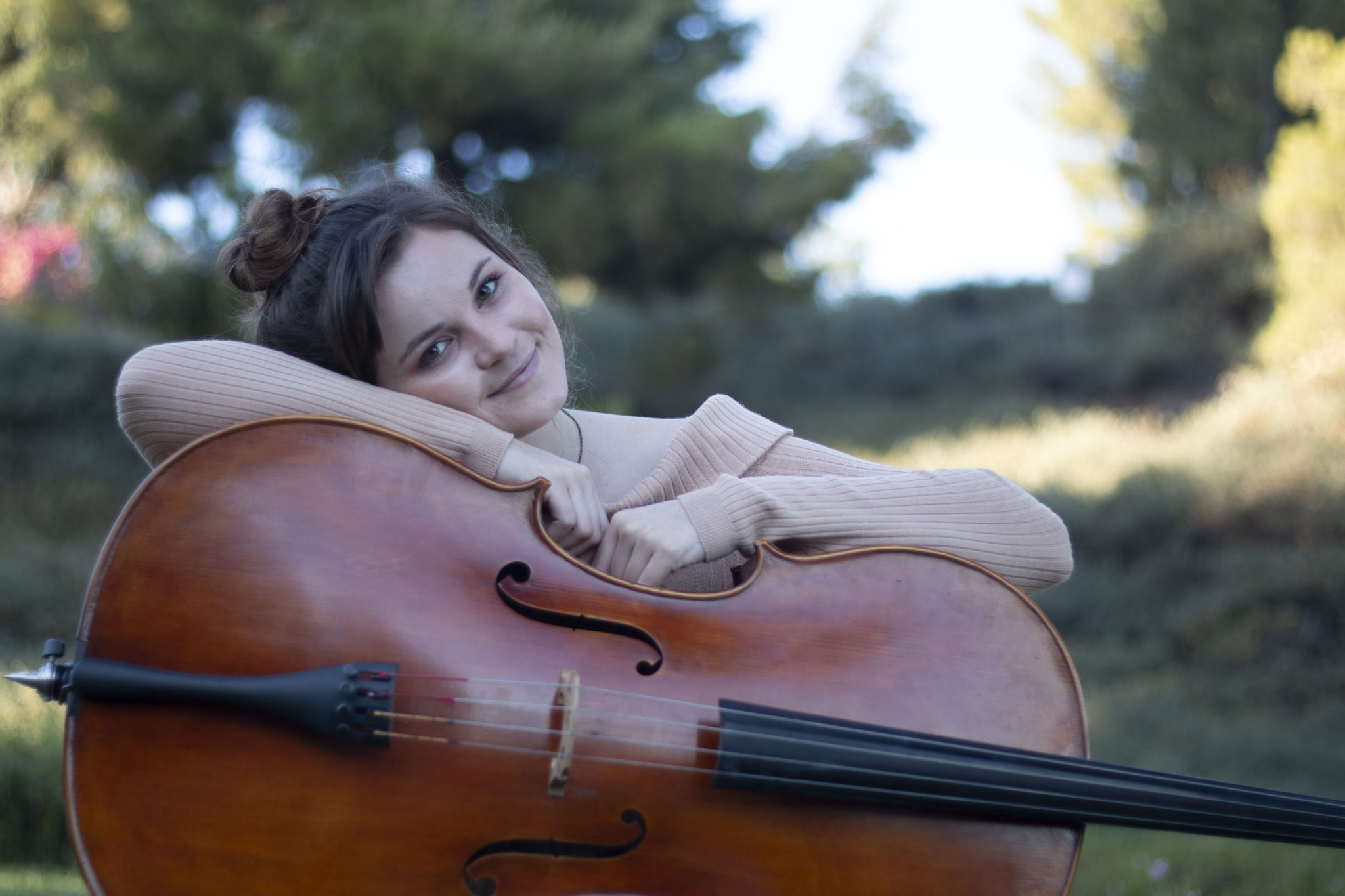 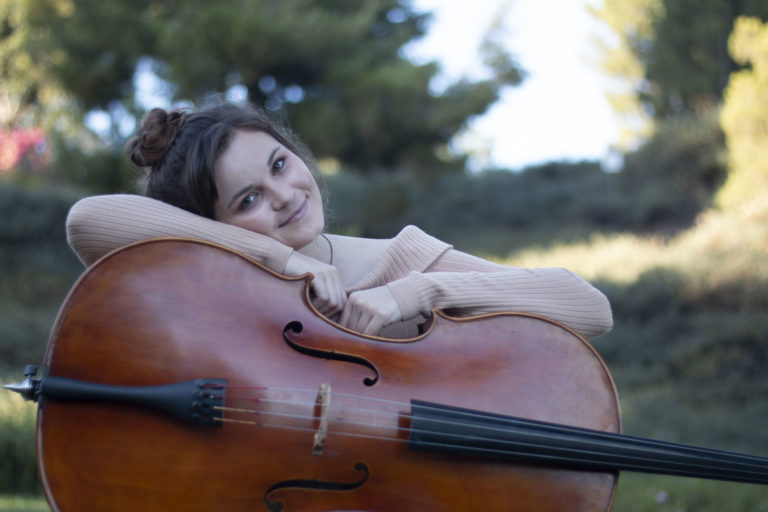 AYS cellist Angela Marvin joins the AYS string ensemble for the Fall Concert on November 1st, the first time playing together as an ensemble since the pandemic. Since subbing with AYS in 2016 and officially joining the cello section in 2018, Angela has played in many unique performances, the Fall Concert being no exception. Read our interview with Angela below to  hear her new rehearsing techniques during the pandemic, performance opportunities as a cellist, and important work with arts education.

When did you start playing your instrument, and why did you choose cello?

I began studying the cello when I was eight because my mother was the string orchestra teacher at my elementary school. She still teaches at the same elementary school along with her main role as Executive Director of the Conejo Valley Youth Orchestra, which I was a part of for eight, very formative years of my life! It’s safe to say that she has always been very influential to my life in music.

I think I picked cello because my older brother had played it in elementary school too. It’s funny that a decision given such little thought ended up giving my life what I have now. I would choose it again if I had to.

What has been your most memorable moment with AYS?

I have SO many amazing memories with AYS, like my very first time performing with AYS during the ET Hollywood Project Concert at Royce Hall, and of course playing at my favorite hall, the Walt Disney Concert Hall. Though, I think the most memorable moment is the Year of the Woman concert when we played Susan Botti’s piece EchoTempo with Ted Atkatz on percussion. Atkatz is the Director of Percussion Studies at CSU Long Beach where I attend school, so it was really cool to play alongside him and witness his talent as a team. He has an impressive resume, and seeing him in action with seemingly a thousand percussion instruments surrounding him during this piece was a huge treat. The piece involved intense collaboration within the orchestra, which often brings music-making to a magical level.

Tell me about your studies at the Bob Cole Conservatory of Music at CSULB.

I graduated in May of this year, 2020, with my undergraduate degree after transferring from my hometown’s community college. I was under the tutelage of cellist Joon Sung Jun when everything went online for the rest of that semester. I am currently in my first year as a graduate student at the same conservatory with Dr. David Garrett, who is a cellist with the Los Angeles Philharmonic. Studying with Dr. Garrett this fall has already made a difference in my approach to professional orchestral work. Prior to the pandemic, I played with the conservatory’s Symphony and with the AMICI cello ensemble, which was a project created by Mr. Jun. We students have had the privilege of having guest musicians and conductors give masterclasses and seminars at our campus in Long Beach. We have several very strong departments at the conservatory and I hope for more collaboration across programs when we return to campus safely. Most importantly, I am impressed with how every person has handled these trying times. Professors who were already basically superheroes are even more so. Student musicians have gotten extremely creative in keeping the music-making going between each other. I’ve been witnessing how incredibly tough and optimistic my mentors and peers can be. Over the years, I’ve deeply appreciated the support AYS always gives to musicians who also have performance commitments at music school. We definitely work together as a team. 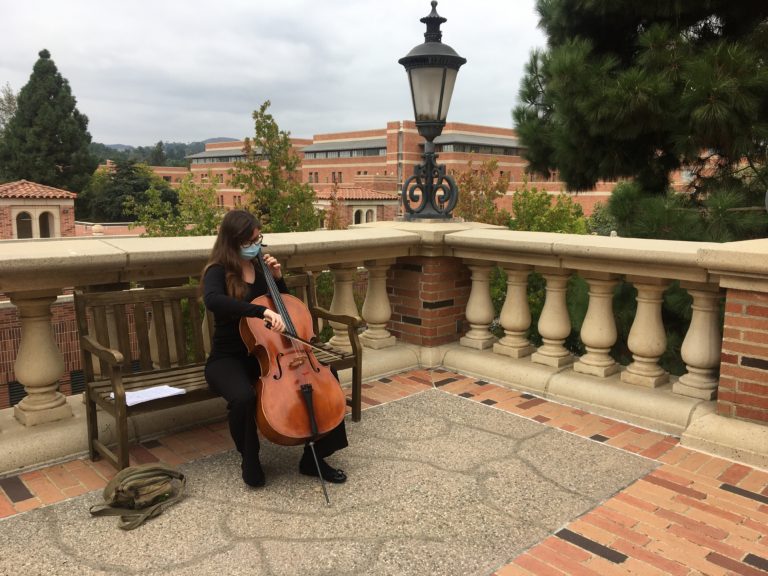 How have you been practicing during the pandemic while school has been online?

It’s been pretty difficult not having a dedicated practice space where I can easily stay “in the zone.” However, I’ve learned a lot about myself regarding self-discipline and sheer will, practicing in the same room as my bed. The pandemic has caused our daily routines and schedules to lose shape, so as artists we have to be smart about making our practice effective at home without the inspiration of the music community buzzing around campus.

The Fall Concert is coming up, how has this rehearsal process been different from other concerts?

Well, we haven’t played together in a very long time, and some of the musicians will be completely new to me. I feel I have a lot more responsibility because the cello section is so much smaller due to the social distancing protocol. We have three cellists total, so we have to strive to synchronize every nuance. Sometimes the music calls for each cellist to play different lines, basically meaning three different solos! It’s super cool, but we don’t want to leave any room for error, especially with such a limited amount of time to rehearse as an orchestra. For the best preparation possible, the three of us have met on Zoom in advance for a sectional. It has also been helpful to listen to recordings of the pieces, and even play along with them to give myself a more realistic sense of how performing will really go. Since this concert only has two string pieces programmed, it’s been nice to be able to narrow my focus. 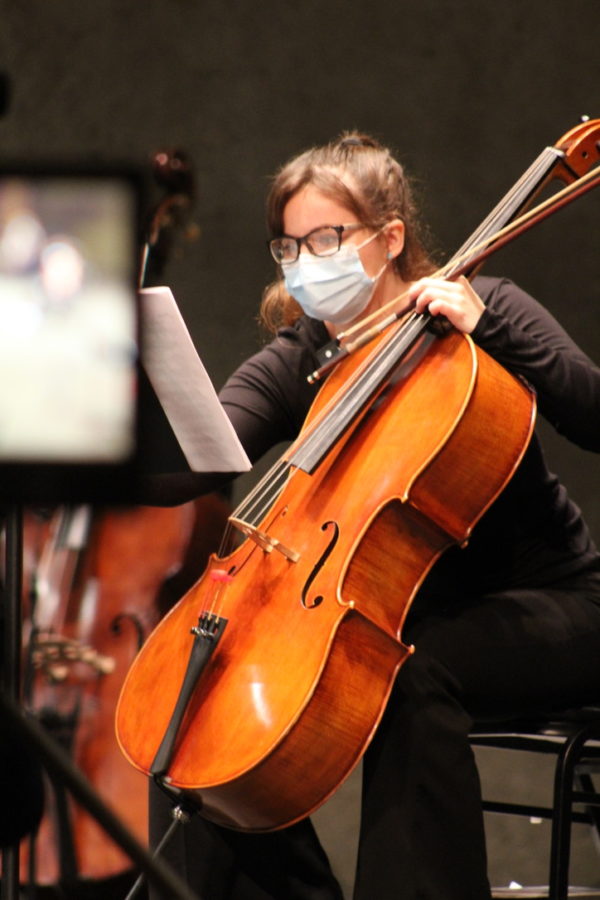 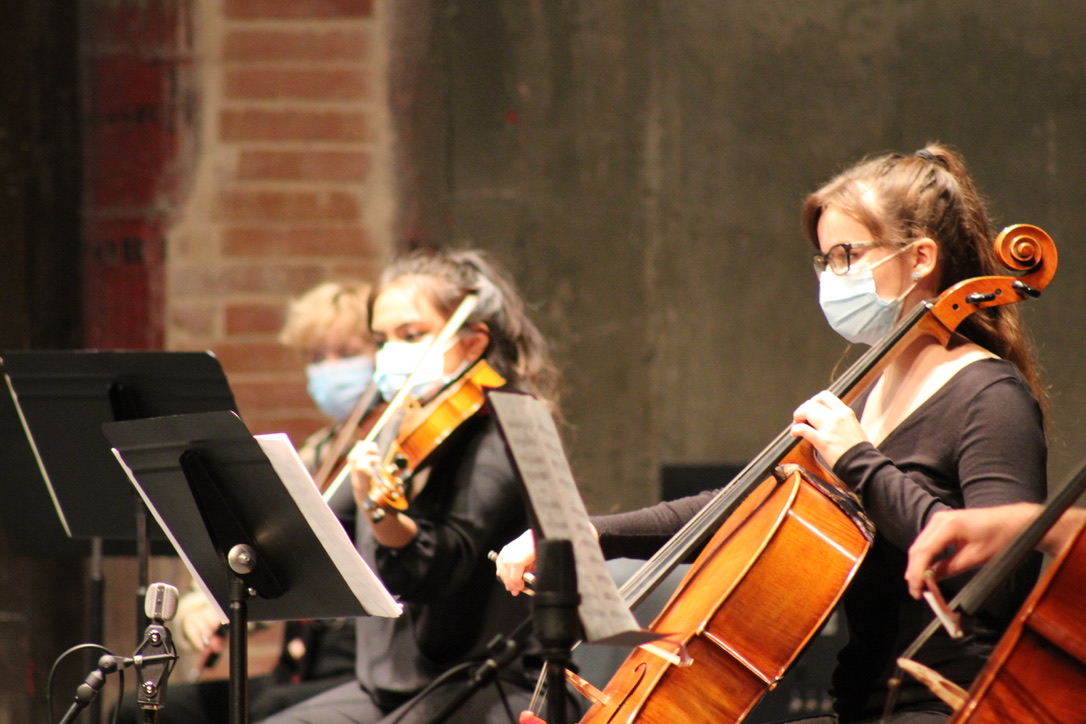 How is performing to an empty audience at Royce Hall different than if an audience were there?

I remember having to do this for my senior recital this past spring, as well as a performance with the Bob Cole Symphony before we moved online. I think it makes performing more intentional and energizing to have a present audience absorbing the music in real time. This immediate human connection is what makes performing live so rewarding. Being able to play it once through for people gathered in a dark, quiet hall with you is much different than recording it for people to watch at home. Despite these differences, I’m extremely thankful that we have the means to perform at all and be together again. I’m so excited to experience something new with AYS, and to be able to stream our art into homes around the world is incredible.

You are also an educator and a coach for our Share-A-Stand program. What are you most drawn to about teaching cello to young students?

I’m most drawn to having the opportunity to be more than a sole cello teacher to the students. These kids are at a stage of huge personal growth in their lives, and often need mentors and support systems who provide them with the help, listening, and love that might really help them through something. Mental health is very important to nurture in yourself and to encourage in others as well. I love teaching cello because it’s a passion of mine, so to join these concepts is very special to me.

Where would you like to see your career go?

As a cellist or artist of any kind, it can be difficult to lay down any one path you want to follow. I know that I love performing and being part of something larger than myself. Summer music festival summer programs that included orchestra, chamber, and solo repertoire have been some of the most meaningful times of my life. I really enjoy being an orchestral musician and would like to continue with AYS. With some background in music technology and while currently studying improv, I’m extremely curious about further establishing the cello in different corners of the music world. I see myself dedicating my music career to that sort of innovation as well. Being an influential teacher and coach is also really important to me, so I envision myself continuing this kind of work too.

I love that AYS has opened the door to other things for me including the coaching position with Share-a-Stand and other performance opportunities. Because of AYS, I was invited by the Hollywood Concert Orchestra to go on tour with them around China during January this year. AYS provides contacts to people in the music community that might not have been made otherwise. I thank AYS for changing my life so much within just a few years so far. 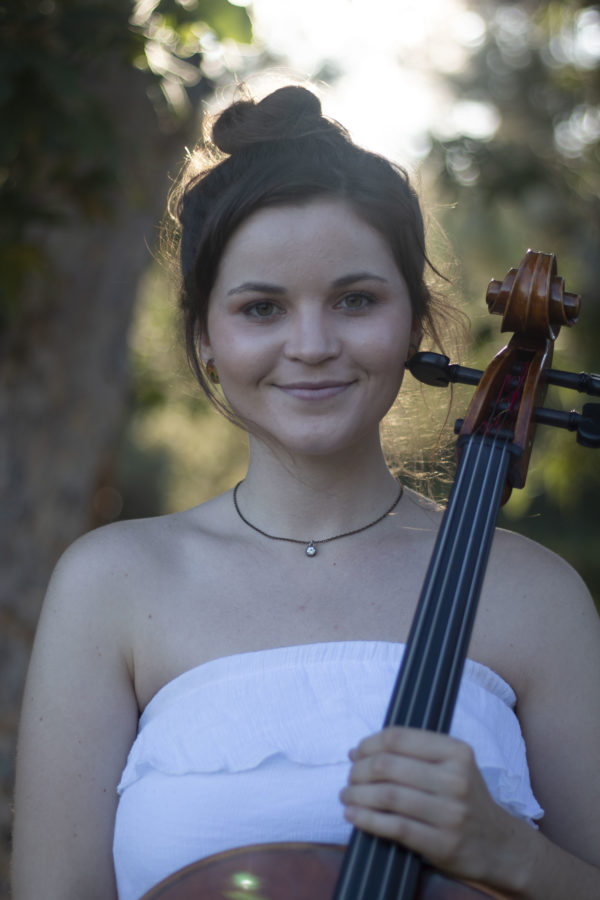 Angela Marvin is a cellist based in Ventura County, California. Having studied with Saundra Sonderling,  Dr. Yoshika Masuda and Dr. Ashley Walters, she continued under the tutelage of Joon Sung Jun in earning her Bachelor of Music at Bob Cole Conservatory of Music in Long Beach, California. She is currently completing her Master’s Degree at BCCM with cellist Dr. David Garrett of the Los Angeles Philharmonic. Holding a Certificate of Music Technology, Angela is a seasoned audio engineer and songwriter as well.

Angela is an active performer and educator throughout Southern California. She is currently a member of the American Youth Symphony based in Los Angeles, and previously the Bob Cole University String Quartet and AMICI Cello Ensemble in Long Beach. She recently founded jazz quintet, Polaris, who performed with Michael McDonald at the 2020 Watermelon Spring Jazz scholarship fundraiser in honor of drummer and best friend, Davis Velarde.

In 2015, Angela began her teaching career as a private instructor and ensemble coach. Some of her students are now part of Conejo Valley Youth Orchestras, a non-profit organization that provides competitive training to young musicians. Angela is a cello coach with the Share-a-Stand engagement program of American Youth Symphony that is partnered with three middle school orchestras throughout LA county.