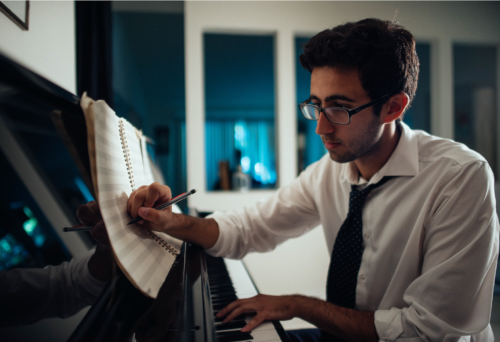 Alexander Mansour is a composer, pianist, and cellist from Los Angeles California. His music is fascinated with the lyricism of romantic expression, dramatic juxtaposition of disparate harmonies, and dynamic narrative structures.

As a composer, Alex is passionate about writing for both the concert hall and the screen. A recent orchestral work, Spark, was premiered by the Alabama Symphony Orchestra in spring of 2021. He was invited to premiere a new commission at the Yale School of Music (2020) for the Norfolk New Music Festival. He has had two orchestral pieces (To the Light / Fantasy Noir) premiered by the USC Thornton Symphony, and was awarded third place for the American Prize. Alex also recently composed a string quartet, Memory Lane, for reading by the Aizuri Quartet. His chamber music has been performed at the Bowdoin and Atlantic Music Festivals. Alex currently serves as inaugural creative/composer fellow with the American Youth Symphony.​

His music for media has been featured both theatrically and on streaming platforms. Most recently, he scored a documentary for director Patrick Creadon – THE LOYOLA PROJECT, which is playing on CBS Sports and in April, on Paramount +. Previously, he worked with director Robert Weide on VONNEGUT: UNSTUCK IN TIME – distributed fall 2021 by IFC Films. Over the years, he has been recognized four times as an ASCAP Finalist in the Morton Gould Young Composer Competition and the Herb Alpert Young Jazz Composer Awards. Alex just graduated from the USC Thornton School of Music with a Masters in Music Composition, where he studied with Professor Donald Crockett. He previously studied with John Liberatore at the University of Notre Dame, where he double majored in cello performance and film studies.