Deborah RutterKnown for emphasizing collaboration, innovation, and community engagement, Kennedy Center President Deborah F. Rutter is considered one of the most influential arts administrators in the nation. As president of the John F. Kennedy Center for the Performing Arts, Ms. Rutter is the artistic and administrative director of the world’s busiest performing arts center, managing all facets of the facility, including expansive theater, contemporary dance, ballet, chamber music, and jazz seasons as well as its affiliates the National Symphony Orchestra and Washington National Opera. The Center encompasses one of the nation’s largest arts education programs, reaching millions of people of all ages each year, and includes VSA, the international organization on arts and disability. Deborah F. Rutter became president of the Kennedy Center on September 1, 2014, the third person to serve in this capacity, following Michael M. Kaiser (2001-2014) and Lawrence Wilker (1991-2001).

The appointment of the legendary conductor Maestro Riccardo Muti as the CSO’s 10th music director and renowned cellist Yo-Yo Ma as the first Judson and Joyce Green Creative Consultant are two of the key highlights demonstrative of Rutter’s leadership in Chicago. In collaboration, they ushered in a new era of exceptional artistry and unprecedented musical outreach by the CSOA. At the same time, the CSO experienced record-breaking fundraising and ticket sales along with critical acclaim.

Working with the CSO’s board of trustees, Rutter helped reinvigorate educational programming in 2008 by establishing the Institute for Learning, Access and Training, which engaged more than 200,000 people (with primary emphasis on ages 3 to 30) across the broadest possible socioeconomic and ethnic spectrum each year. In 2011, the Institute launched its Citizen Musician initiative, which seeks to sustain and expand the role of music making in civic and cultural life. Also under Rutter’s leadership, the CSOA was an innovator in programming, adding concert series, mounting citywide musical celebrations, resuming the Orchestra’s weekly syndicated radio broadcasts on WFMT-FM, and establishing its own recording label, CSO Resound.

Prior to joining the Chicago Symphony Orchestra, Rutter was executive director of the Seattle Symphony, a position she held from November 1992 until 2003. Despite having a deficit when she joined, when Rutter departed for the CSOA, the Seattle Symphony had nearly tripled its annual budget to $25 million, had no accumulated deficit, and the endowment had grown six-

fold to $24 million. During her tenure in Seattle, a new facility, Benaroya Hall, with two concert venues and an educational facility called Soundbridge, were built and are thriving today. Under her watch, programming grew exponentially including city-wide musical festivals, a presenting program which included a wide range of performances, and other community engagement activities. From 1986 to 1992, she served as executive director of the Los Angeles Chamber Orchestra, and prior to that she was the orchestra manager of the Los Angeles Philharmonic.

Ms. Rutter’s ardent support of contemporary composers is evident in the creation of composer residencies at the Los Angeles Chamber Orchestra and Seattle Symphony Orchestra. Her belief in and support of composers continued during her time in Chicago as she forged relationships with Pierre Boulez, Mason Bates, Anna Clyne, and others.

Rutter has been involved in a number of national and local cultural organizations and was a member of the board of Arts Alliance Illinois, Chicago’s Grant Park Conservancy, the Solti Foundation, After School Matters, the Cultural Advisory Council for the City of Chicago, the Association of California Symphony Orchestras, and the prestigious Curtis Institute Board of Overseers. She was a board member and president of the Washington State Arts Alliance Board of Directors and chaired the Policy Committee for the League of American Orchestras.

Rutter is a graduate of Stanford University and holds an MBA from the University of Southern California. She was born in Pennsylvania and grew up in the Los Angeles area. She studied piano and violin from an early age, and she played violin with orchestras throughout her education. 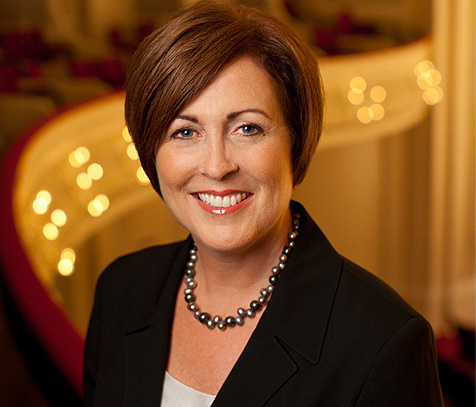