This concert program was originally planned to include Marche Slave by Tchaikovsky.  Due to recent global events, this piece will be replaced by Finlandia by Sibelius.

On March 6th, 2022 the American Youth Symphony will take the stage at Walt Disney Concert Hall for the first time since February 2020. For this momentous occasion, Music Director Carlos Izcaray has compiled a fresh and enthralling program entitled Intersections. In addition to a piece written by Izcaray himself, the concert will also include works by Brian Raphael Nabors, Jennifer Higdon, Unsuk Chin, Jimmy Lopez, and Pyotr Ilyich Tchaikovsky. Attendees may be surprised to find that all of these composers, with one notable exception, are alive and working around the world at this very moment. Programs such as this represent a larger shift in today’s classical scene as more and more organizations rethink their concert programming to be more relevant and inclusive. Each of the composers featured here, though from largely different backgrounds, are all united through forging their own voices in the realm of Western classical music. 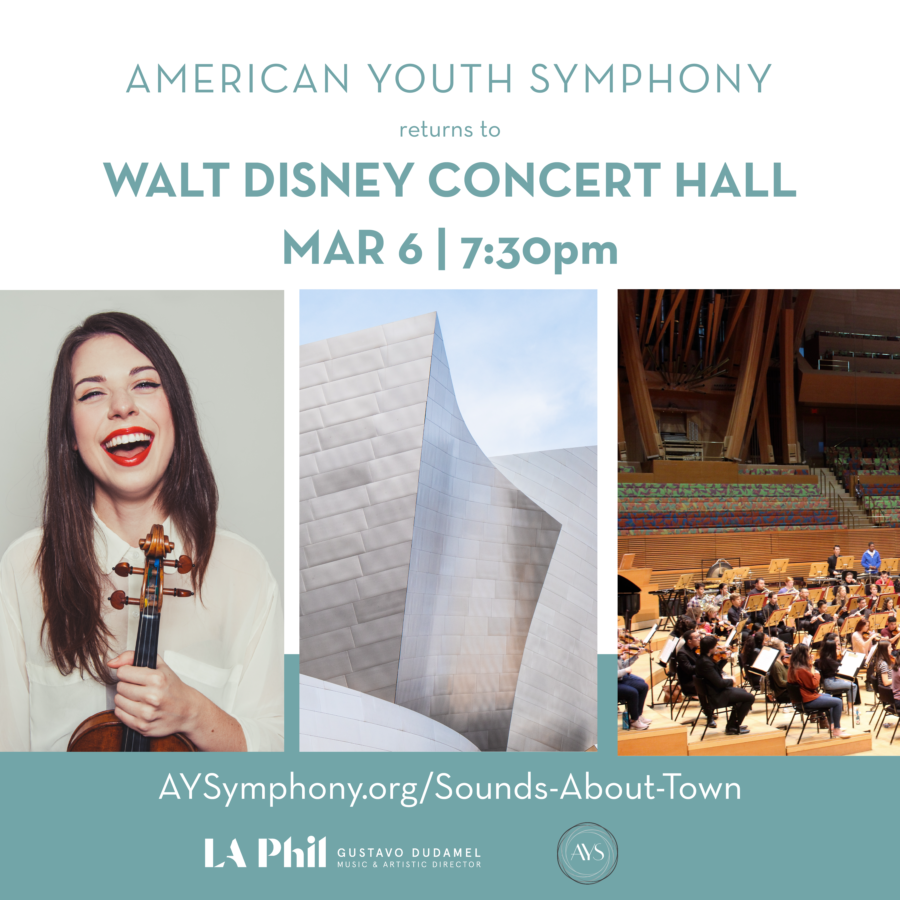 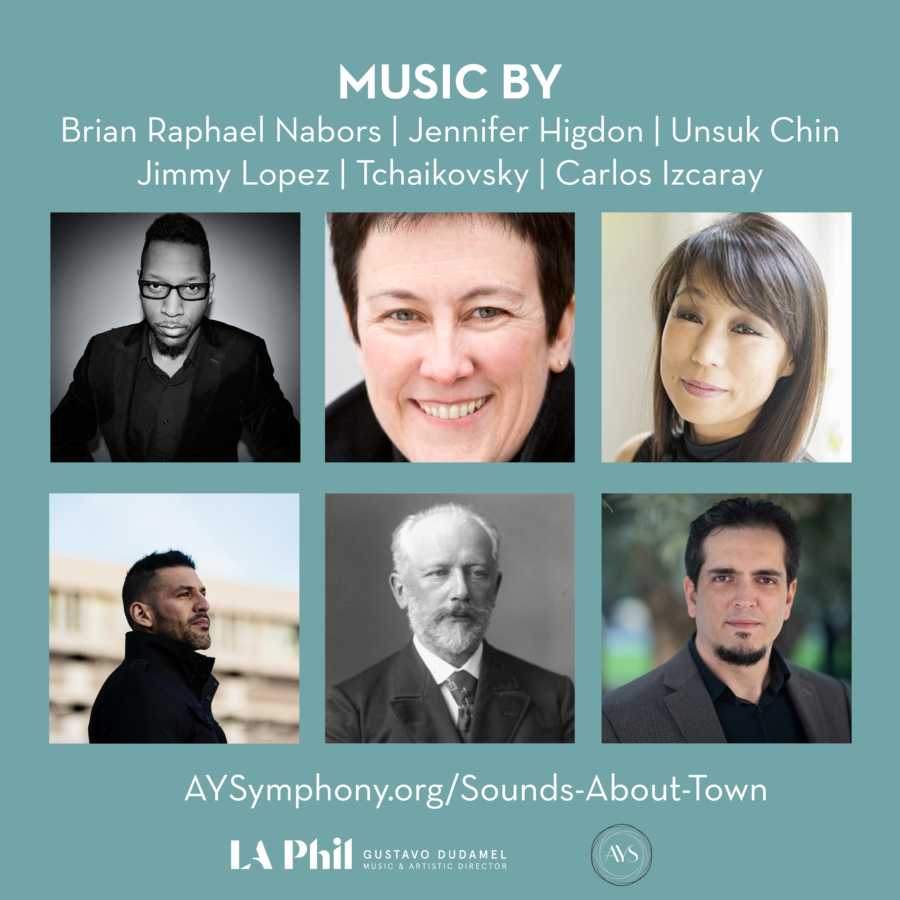 Most people will recognize the name of Tchaikovsky, known for his classic ballet scores The Nutcracker and Swan Lake alongside his symphonies and other popular orchestral works like the 1812 Overture. A name that is perhaps not quite as household, but should be, is that of Jennifer Higdon: one of the foremost American composers active today. She has won three Grammy awards for Best Classical Composition in 2010, 2018, and 2020, and also received a Pulitzer Prize for her Violin Concerto. Brian Raphael Nabors, Unsuk Chin, and Jimmy Lopez each weave their own unique and diverse experiences into their compositions. These are not only composers who are proud of their roots but ones that blend their own cultural and personal traditions with that of traditional symphonic writing.

Opening the program is Pulse by Brian Raphael Nabors, a native of Birmingham, Alabama. Nabors’ budding career has included associations with the Tanglewood Music Festival, the Detroit Symphony, and the Nashville Symphony. Nabors was also a Fulbright recipient, studying composition at the Sydney Conservatorium of Music. About the piece, Nabors writes that “Pulse is an episodic rhapsody that explores several phases and colorful variants of rhythm all held together by an unwavering pulse.”

Grammy-nominated violinist Tessa Lark, who Maestro Izcaray describes as a “true contemporary soloist,” joins the orchestra for Jennifer Higdon’s Pulitzer Prize-winning Violin Concerto. This piece was born out of the relationship between the composer and the dedicatee, Hillary Hahn, a former student of Higdon’s at the Curtis Institute of Music in Philadelphia.

Unsuk Chin’s Subito con Forza is a short, lively work composed for Ludwig van Beethoven’s Semiquincentennial (or 250th) birthday celebration in 2020. The piece pays homage to some of Beethoven’s most beloved works: his Fifth Symphony and the “Emperor” Piano Concerto. Chin, an award-winning composer and native of Seoul, has built a thriving career in Berlin, where she resides, and around the world for her modern musical voice.

Jimmy Lopez’s América Salvaje was commissioned for the inauguration of the National Library of Peru. The work is based on the poem “Blasón” by José Santos Chocano. Lopez writes that his piece “aims at reflecting Peru’s multicultural roots with the same clarity and strength as the original text. América Salvaje travels across several sonic landscapes of diverse origin in which Andean and European instruments are used.”

Tchaikovsky’s Marche Slave, which translates to “Slavonic March,” was premiered in 1876 at a benefit concert for soldiers wounded in the Serbo-Turkish war. Tchaikovsky utilized Serbian folk songs and even quotes the Russian national anthem “God Save the Czar ” in this rousing patriotic work. In a program featuring composers who are proud of their cultural heritage, this type of nationalistic composition dates from an earlier time in history when composers such as Antonín Dvořák, Bedřich Smetana, and Frédéric Chopin all infused their compositions with the traditional folk melodies and dance rhythms of their native countries.

Closing the program is Carlos Izcaray’s Under the Shadows: An Immigrant’s Journey, which he describes as a “love letter to the orchestra.” The piece draws from his own personal experiences as an immigrant, born in Venezuela, but today residing in Alabama as Music Director of the Alabama Symphony Orchestra. The piece also speaks to the larger context of immigrants and their contributions, throughout history, on classical music as an art form.

In speaking with Maestro Izcaray about this diverse program, he mentioned his proclivity to always “shake things up a bit.” We discussed the traditional classical canon, noting how the repertoire widely accepted today was assimilated over many generations. Maestro Izcaray also noted the many ways in which diverse voices are overlooked, including but not limited to cultural, racial, gender, and geographical biases. Many of the composers we consider “great” today became successful when someone took a chance on them and gave their music a platform, a theme that Maestro Izcaray hopes to continue with concerts such as this one.

He also mentioned how the Walt Disney Concert Hall stage itself presented inspiration for this program, noting that it is a “welcoming stage” for trying new things, such as LA Phil’s ambitious and diverse programming. Through his own initiatives with AYS, such as “The Year of the Woman” and various commissioning projects, Izcaray hopes to “improve programming in a sustainable way, highlighting the diversity in our field.” He also explained that though we may all be of different backgrounds and life experiences, there is a “universality of what we do” as musicians and artists, and the intersectionality of all these aspects.

In regards to AYS’ mission as a training ground for aspiring musicians, Maestro Izcaray and I discussed the importance of performing music by living composers. While it’s an incredible experience to bring a piece of music to life that is hundreds of years old, it is an entirely different experience to perform something written during one’s own lifetime. As a musician, you know that the piece you’re playing was written by someone alive and working in the world right now, just as you are. Through the power of the internet and social media, we can “go to the source” to learn about these composers and follow their career in real time.

Building this culture of sustainable, representative programming is something Izcaray is very passionate about and proud of. Young musicians today are anxious to see the field of classical music grow and evolve. One way is to program works by marginalized composers and present music that, for a long list of potential reasons, has been historically overlooked and ignored in favor of composers with a European lineage. Programs such as this one highlight the inherently diverse nature of classical music and showcase ways in which we can preserve certain traditions but always stay focused on inclusivity. In Izcaray’s own words, “We are establishing a methodology that can be taken elsewhere…the framework exists to be part of the change.”

Because this concert features composers of different ages, time periods, genders, sexual orientations, races, and cultural backgrounds, we can witness how each of these aspects intersect and are revealed through a composer’s music. Programs like this allow us to see these different intersections through the specific lens of an artistic medium: composing for an orchestra. How do these pieces relate? How do they contrast? How does the composer treat their subject matter and how does their music reflect who they are as both an artist and person? We hope you’ll join us on Sunday, March 6th to learn and experience all this glorious music with us. Learn more about the concert here. 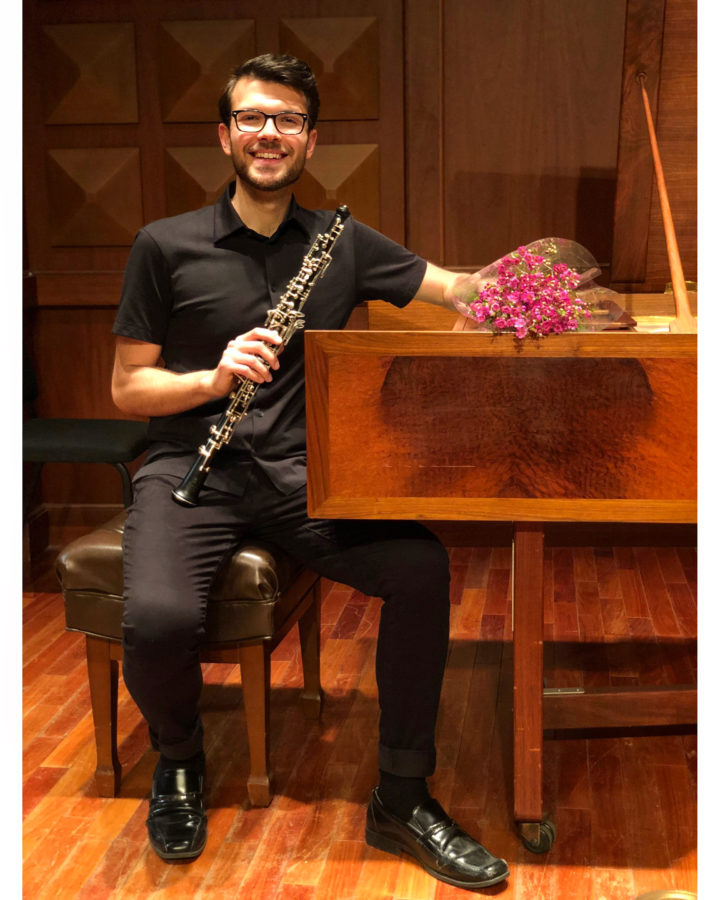 Noah Breneman was born and raised in Reading Pennsylvania. Although he joined band in 5th grade (playing Euphonium), it wasn’t until Jr. High that he discovered the Oboe. Noah attended Penn State University, graduating magna cum laude with a Bachelor’s degree in Oboe Performance. After 22 years in Pennsylvania, Noah moved to Los Angeles to pursue a Masters degree at the University of Southern California. While at USC, Noah performed in a woodwind quintet, The Santa Ana Winds, which competed in the 2019 Plowman Chamber Music Competition. His oboe teachers have included Jill Haley, Tim Hurtz, Joel Timm, and Marion Kuszyk. Noah is excited to be back in Los Angeles now that things are opening up and is equally excited to be joining AYS as their new Principal Oboe and Citizen Musicianship Fellow!