Free for everyone! Use the Zoom meeting ID and passcode below.

The American Youth Symphony (AYS) and A Place Called Home (APCH) have joined forces once again to bring classical music to South Central families and the local community. On Friday, March 5, 2021 at 6:15 p.m., as part of APCH’s Family Film Fridays, AYS will present an interactive pre-show concert event featuring performances by AYS and APCH musicians, a live raffle, and a conducting lesson led by Jessica Bejarano, founder and conductor of the San Francisco Philharmonic. Following the pre-show concert, guests will be treated to a screening of the animated musical film, Sing.

Join us for this exciting event that has something for the entire family! Use the Zoom meeting ID and passcode below to join. Visit our Virtual Know Before you Go page for our Zoom tips and recommendations.

Note: All performances and segments will be pre-recorded, with the exception of the live raffle. 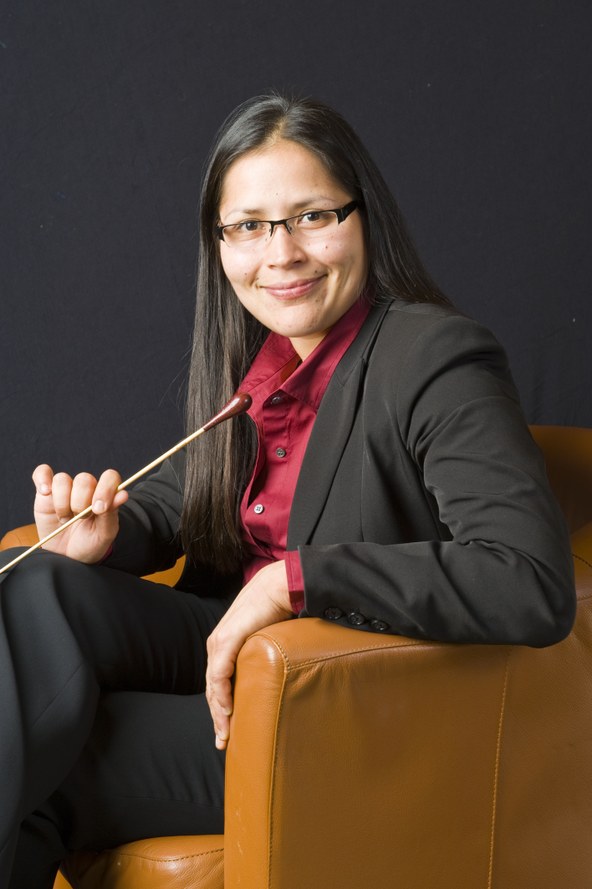 Jessica Bejarano is the founder and conductor of the SF Philharmonic. Jessica also serves as Assistant Conductor of Opera Parallele in San Francisco; Music Director and Conductor of ELM Youth Orchestra; Music Director of the San Francisco University High School Chamber Orchestra; Artistic Director of Youth Orchestra Salinas and regular guest conductor with Camerata Antonio Soler Orchestra in San Lorenzo de el Escorial, Spain. Just recently Jessica was featured on NBC’s The Today Show with Natalie Morales as the “Woman Breaking Barriers as a Trailblazing Symphony Conductor.” PBS News Hour Weekend also featured a segment on Jessica as an emerging female conductor and was named by KQED, one of 10 artists to watch in KQED Arts’ Bay Brilliant Top 10 Artists of 2018.

In 2019 Jessica was the first woman in history to ever guest conduct the American Youth Symphony in Los Angeles. She was also the featured guest conductor and clinician at the San Diego State University’s Women in Music, Diversity and Leadership Conference. In January 2018, she was one of twelve female conductors selected from around the world to attend and conduct at the International Women’s Conference in New York City representing the United States of America and Mexico. During that same time Jessica was the resident conductor of the University of California Santa Cruz Symphony Orchestra. 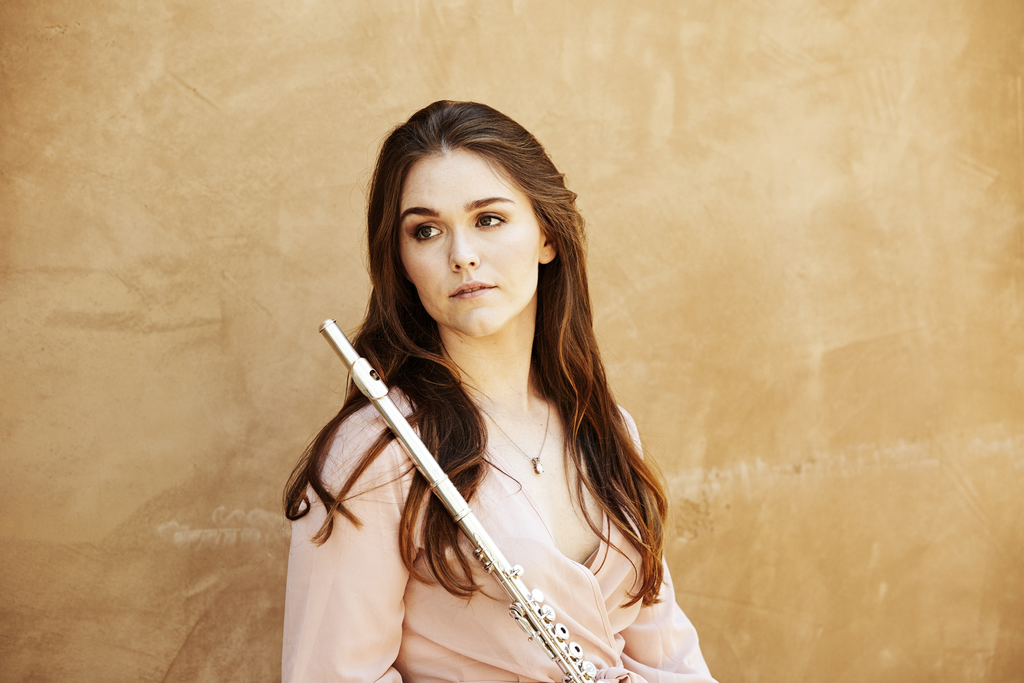 Elizabeth LaCoste is the current principal flutist with the American Youth Symphony, the premiere orchestral training orchestra on the West Coast under maestro Carlos Izcaray, performing in venues such as UCLA’s Royce Hall and Walt Disney Concert Hall. She has performed as a featured soloist at the Hollywood Bowl for the 2019 production of the Little Mermaid: Live-to-Film Concert Experience. Most recently, Elizabeth performed as a soloist with the UCLA Philharmonia in January 2020 where she performed the first movement of the Concerto for flute and orchestra by Carl Nieslen as concerto competition winner. She has premiered many orchestral and chamber works such as Carlos Izcaray’s most recent composition Geometric Unity for virtual orchestra and recorded for composer Sarah Wallin Huff‘s album The Oracle.

Elizabeth has taught at many schools across the Southern California area, and is extremely passionate about flute pedagogy. She has been the guest artist at several masterclasses including Stratus Duo‘s Summer 2019 Masterclass and has been a guest speaker for Jim Walker’s Beyond the Masterclass in 2018. She maintains her own private studio while also teaching in group settings for flutists of various youth orchestras and ensembles, most recently, making her national debut as a pedagogue for the Vermont Youth Orchestra’s flute section.

Elizabeth graduated with her MM in Flute Performance from the University of California, Los Angeles where she studied with world-renowned flutists and teachers, Denis and Erin Bouriakov. She received her BM in Flute Performance from California State University, Long Beach where her primary teacher was John Barcellona. Her other primary teachers include Diana Morgan, Toby Caplan-Stonefield, and Mary Predmore. 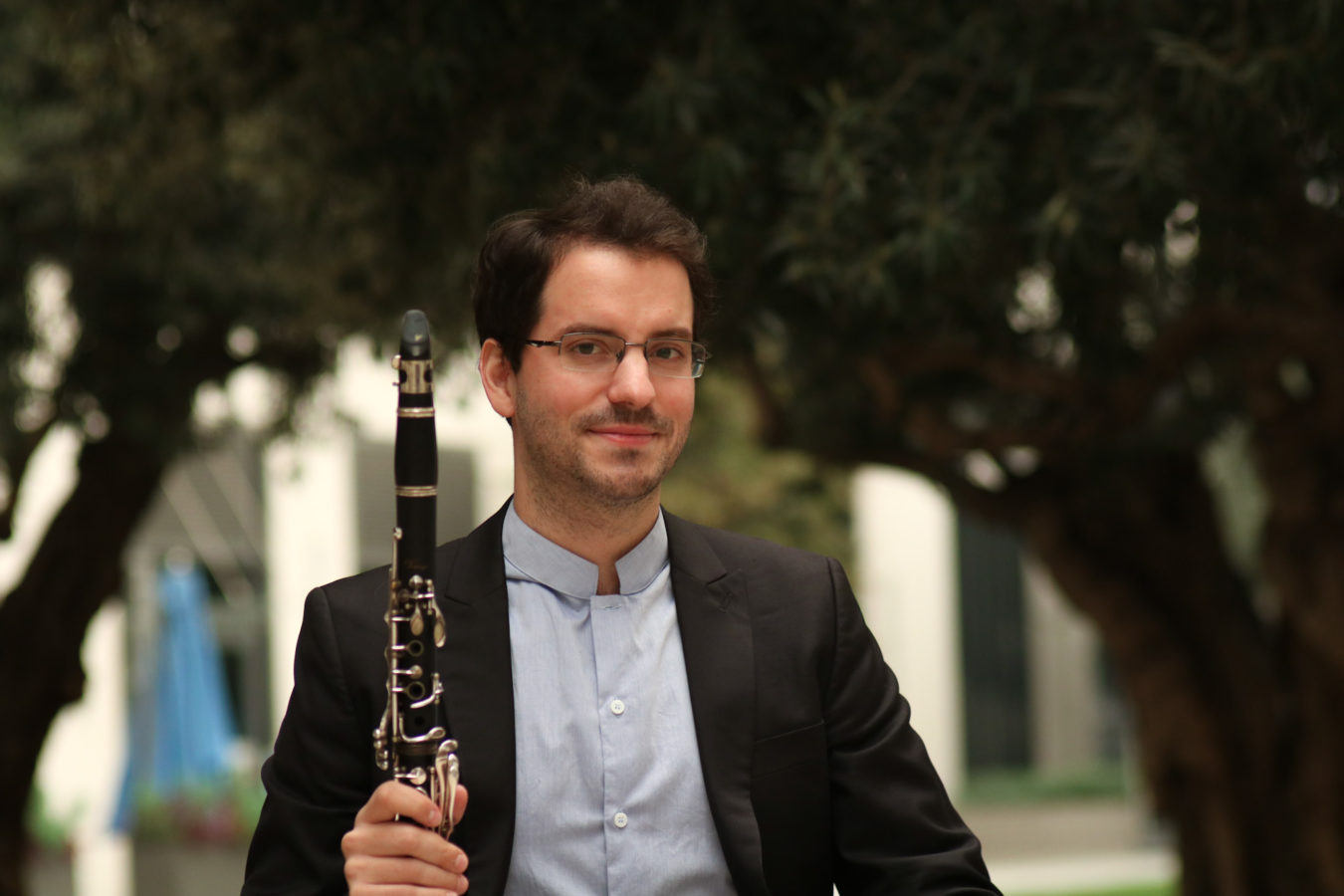 Sérgio Coelho’s playing has been praised as being “superb, to say the least, showcasing the heights of clarinet proficiency and taking the clarinet to its limits”. Chad Lonski from the “Daily Trojan Newspaper” (Los Angeles, CA) about Sérgio’s performance of the Mozart clarinet concerto.

Sérgio is the principal clarinet of the prestigious American Youth Symphony. A native of Portugal, Sérgio started learning clarinet and piano at the age of 9 at the Academia da Sociedade Filarmónica Vizelense. During his time in Portugal, Sérgio maintained an active performance career, performing with multiple orchestras, chamber music groups and solo. Sérgio graduated with a bachelor degree in clarinet and orchestra performance by the Metropolitan National Academy of Orchestra, Portugal, where he studied with Mr. Nuno Silva. In this school Sérgio was the winner of the concerto competition which lead him to perform the Mozart Clarinet Concerto on tour with both the Lisbon Metropolitan Orchestra and the Metropolitan Academic Orchestra.

Sérgio moved to Los Angeles in 2014 to attend the University of Southern California where he completed a Graduate Certificate and a Master of Music Degree in clarinet performance, both under the tutelage of renowned pedagogue Mr. Yehuda Gilad. During his Masters of Music degree he became a fellow of the Latin Grammy Awards Foundation after being selected for a scholarship from this institution. He can be found performing regularly with other orchestras, such as, Kaleidoscope Chamber Orchestra, Santa Barbara Symphony, Downey Symphony Orchestra, and the Los Angeles Sinfonietta. Currently, he is pursuing a prestigious Artist Diploma Degree at the University of Southern California under the tutelage of Mr. Yehuda Gilad. 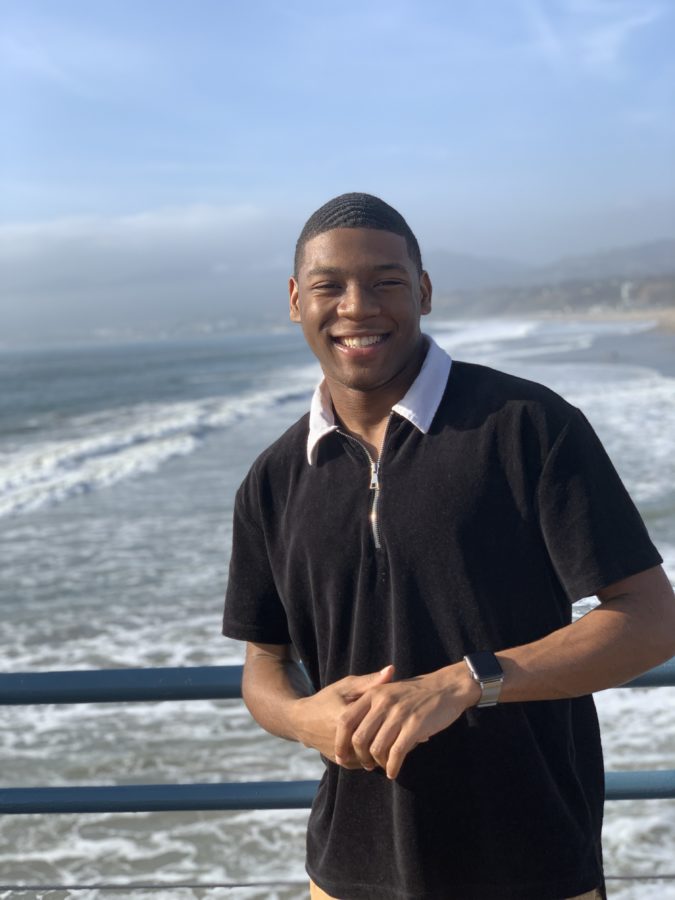 Errol Rhoden is currently based in Los Angeles where he holds the Helgard Field Tuba Chair of the American Youth Symphony. He is pursuing a B.M in Tuba Performance with a minor in Pop Music History Studies from the University of Southern California’s Thornton School of Music where he studies with Norm Pearson, Jim Self, and Doug Tornquist. He has never been limited to classical music as he enjoys playing pop, jazz, hip-hop, and r&b music all the time!

He grew up in Fayetteville, GA where he was a fellow of the Atlanta Symphony Orchestra’s Talent Development Program where he studied with Atlanta Symphony Principal Tubist, Michael Moore. Throughout his career, he has performed in numerous places around the country including the Hollywood Bowl, Ozawa Hall, the Whittington-Pfohl Auditorium, and even Main Street U.S.A at the Disneyland Resort where he was a member of the Disneyland All-American College Band. He has worked and performed with artists such as Wayne Bergeron, Gordon Goodwin, and the Boston Brass just to name a few! Errol has played under the baton of H. Robert Reynolds, Keith Lockhart, Myra Rhoden, and Robert Spano and enjoyed every moment. He has received many accolades during his career including being awarded the Silver Medalist at the Leonard Falcone International Euphonium and Tuba Festival Tuba Student Division. 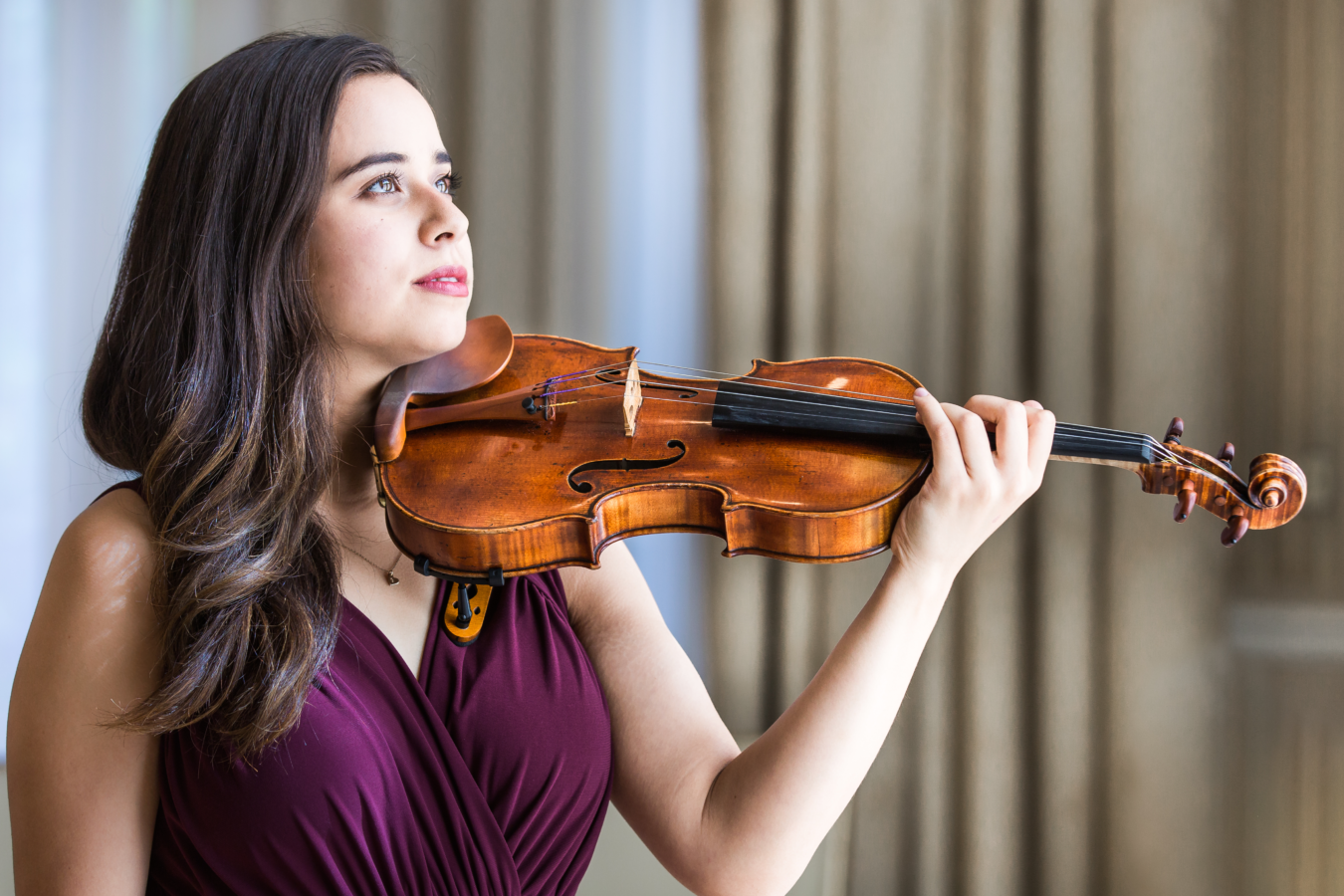 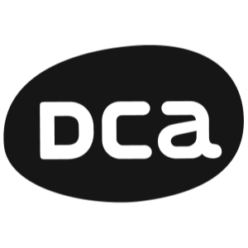 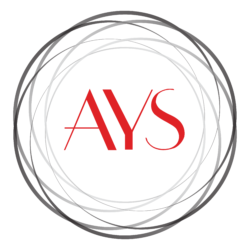